When John Boss was a kid growing up in Grand Isle, La, it was normal to come home from a day at the beach with black feet and a collection of tar balls washed up from the oil fields miles off shore.

The people of Grand Isle are resilient, said Boss, pastor of the First Baptist Church of Grand Isle, but even Hurricane Katrina didn’t prepare them for the BP Oil Spill on April 20, 2010. While Katrina was an “act of God,” in Boss’ words, the explosion that caused the Deepwater Horizon oil rig to spew 4.9 million barrels of oil into the Gulf of Mexico over 87 days was caused by human negligence alone.

That made all the difference to Boss and other residents of Grand Isle. That made it personal.

“With hurricanes we know how to clean up because we’re used to that,” Boss said nearly six years later. “With the oil spill people didn’t have something to do with their energy.”

The population of their barrier island community exploded overnight as reporters, volunteers and prison workers descended on “ground zero” of the spill. While some locals cashed in by lending their vacation homes and boats to the clean up effort, Grand Island’s vibrant shrimping industry was hit hard by the influx of oil and the small town remained wary of outsiders.

Years later, many Grand Islanders are still angry. These “small people,” as BP chairman Carl-Henric Svanberg referred to them, haven’t forgotten the endless waves of oil that soiled their summer and stained the area’s economy.

The Deepwater Horizon blowout released more than 18 times the amount of petroleum that polluted Alaskan waters after the Exxon Valdez spill of 1989, making it the largest oil spill in United State history. The initial explosion that killed 11 workers on the Deepwater Horizon occurred after the oil rig’s blowout preventer failed to contain pressurized crude oil and natural gas while drilling an offshore well.

The enormous pressure placed on the seafloor 5,000 feet underwater prevented BP from capping the burst pipe for 87 days. At the same time, ocean currents spread the oil throughout the Gulf, poisoning marine life and coating the shoreline with gelatinous brown tar from the coast of Florida to the Atchafalaya Basin. 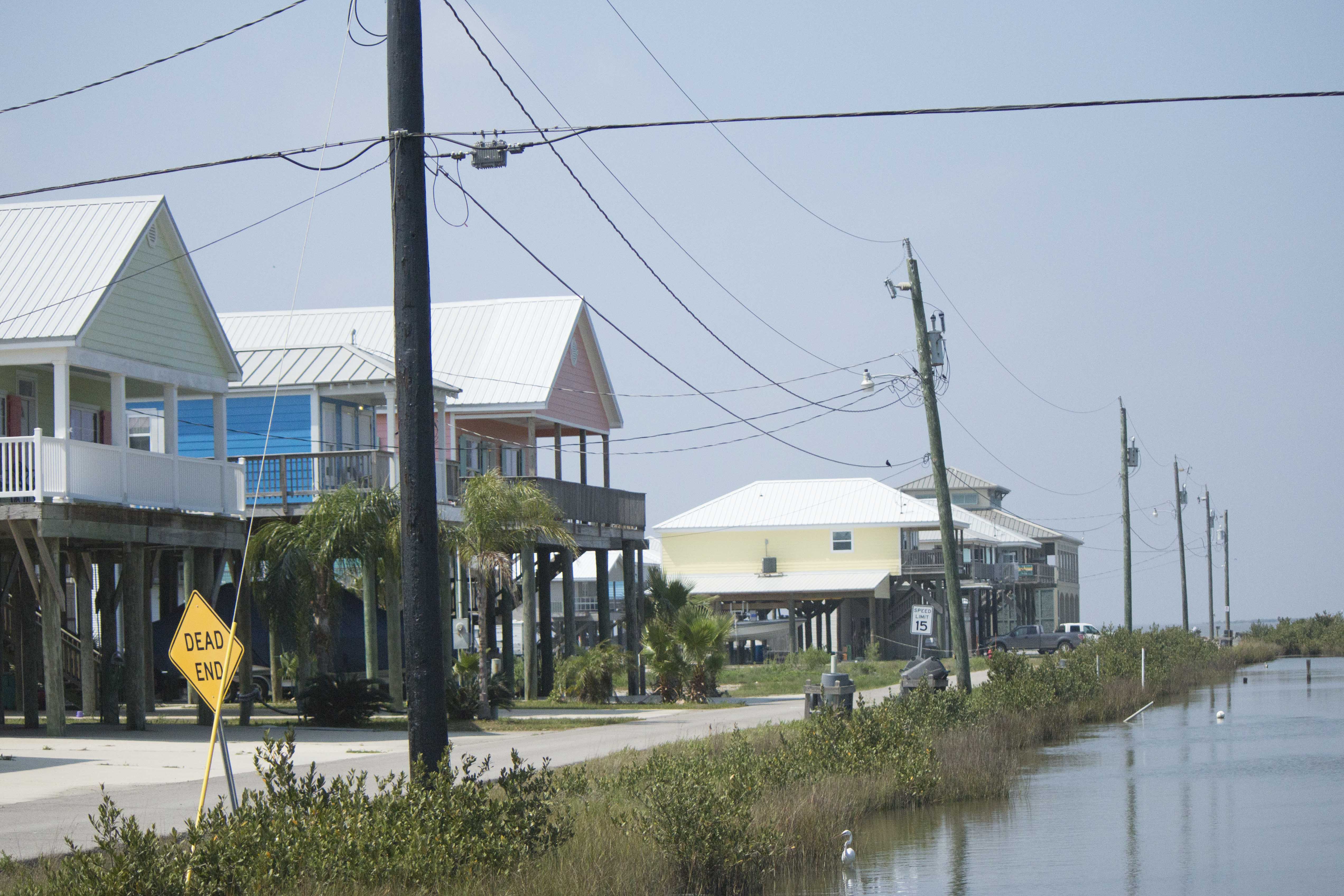 Homes in Grand Isle display stilts that have raised them an entire story off the ground to prevent flooding from coastal storms. Grand Isle is the only inhabited barrier island on the Louisiana coast, and a destination for vacationers.

Leoda Bladsacker, owner of Starfish Restaurant on Grand Isle, said that tourists were driven off by the oil lined beaches and concerns that pollution from the spill may have tainted what little shrimp, crawfish and other seafood that remained in the Gulf. Not only did this hurt local businesses, she said, but Grand Isle residents had to start locking their doors and stopped going out at night because of the rowdy prison laborers BP brought in to clean up the coast.

Bladsacker and her husband, who has since died of cancer, used to stay up at night listening to the planes spray dispersants on the Gulf and worrying about how those chemicals might affect their infant grandchild. She swears that BP dropped the dispersants, chemical solvents designed to break oil into biodegradable droplets, over Grand Isle itself, and said she fears the spill contributed to her husband’s illness.

BP reached a $20 billion settlement with the U.S. Department of Justice in Oct. 2015, the majority of which will go toward Clean Water Act penalties and natural resource damages. The oil giant is estimated to have spent $54 billion between disaster cleanup and civil penalties since 2010.

Bob Dudley, BP’s CEO, said the settlement, a portion of which will be used to rebuild Louisana’s shrinking coastline, is enough to resolve BP’s liabilities in the Gulf States, according to a July 2015 press release.

“For the United States and the Gulf in particular, this agreement will deliver a significant income stream over many years for further restoration of natural resources and for losses related to the spill,” Dudley said in the statement.

Bladsacker, however, said this isn’t enough. She believes everyone in Grand Isle - not just the fishermen - should have been compensated for reduced quality of life and property values after the spill.

“The whole focus was on the spill and not the community, not how it affected us. It’s like nobody cared what happened to Grand Isle,” Bladsacker said. “They could have compensated every single family and still been alright.” 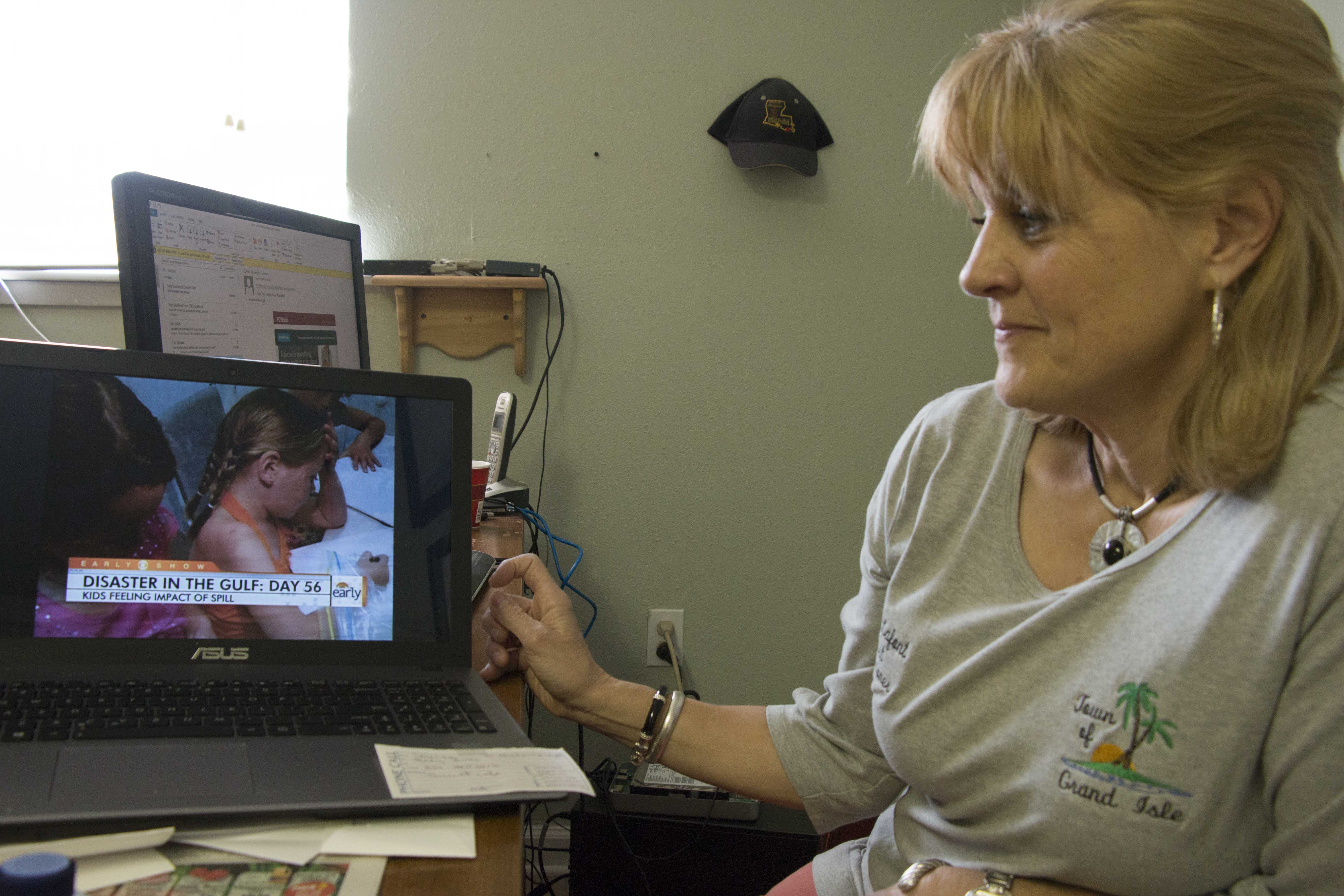 Louise Lafront, a Grand Isle resident, watches a video she has saved that displays news coverage of the 56th day into the BP oil spill that occurred in 2010. Grand Isle was deluged by clean-up workers, government and oil officials and the press that summer.

Louise Lafront, another Grand Isle resident, said she thought BP had fulfilled its responsibility to those affected by the spill.

“I think people who are still concerned about it are the people who want to collect,” Lafront said. “They have enough money to last their entire lives, they just keep milking and milking to get more.”

Things happen, she said, and if people are concerned about the long term impacts of the spill, then they should leave.

Like most Louisiana natives, the people of Grand Isle aren’t about to pack up and leave, though. Tempers and tension may have been high, but the island was still home.

When the oil first began to come ashore a month after the Deepwater Horizon blowout, Grand Isle Port Director Wayne Keller found himself in the midst of a standoff between BP’s security crew on the one hand and members of the U.S. Coast Guard advocating for his expertise on the other. After a few tense moments, Keller was eventually allowed onto the beach, but he said BP did its best to keep the public at a distance during the cleanup.

“BP basically declared martial law, it was insane,” Keller said. “It was not a good scene, so everyone got extremely indignant and angry at everyone on the outside.”

Grand Isle Port Director Wayne Keller describes the flow of the oil spill not just around Grand Isle but neighboring barrier islands. Keller at times was frustrated and hampered at times by the restrictions he encountered during the cleanup effort.

Keller worked with Louisiana’s former governor, Bobby Jindal, as well as the Army Corp of Engineers to help protect the delicate shoreline environments surrounding Grand Isle during the spill. Faced with bureaucracy on all sides, Keller said he was frustrated with both the government and BP’s response.

The long orange tiger dams favored by authorities to contain the oil didn’t stop the slicks from coming ashore because the high surf pushed them below the shallow barriers, Keller explained. The governor refused to use larger booms with seven foot skirts, then held a press conference in the Grand Isle Port Commission’s office.

“They sat here and told the public that we’re doing everything we can and they said we’re using the biggest stuff we can. I walked out in front of them, it was on a newscast, and I told them it was a lie,” Keller said.

Frank Paskewich, president of the Clean Gulf Associates, said the Deepwater Horizon blowout was the biggest unsecured release he had ever seen. Still, Paskewich, whose organization provides spill containment equipment to oil companies, said he tries to keep it in perspective.

If the Gulf of Mexico were the size of New Orleans’ Superdome, he reasoned, the amount of oil and chemical dispersants released into the water would fill a single water bottle. Less than a month after the initial explosion, then BP CEO Tony Hayward made a similar comparison during a 2010 interview with The Guardian, in which he rationalized that the spill was “relatively tiny” compared to the “very big ocean.”

BP’s handling of the Deepwater Horizon oil spill has since been regarded as one of the worst public relations missteps of recent memory, and it is even used as a case study in PR classes. Hayward stepped down as CEO in October, 2010. 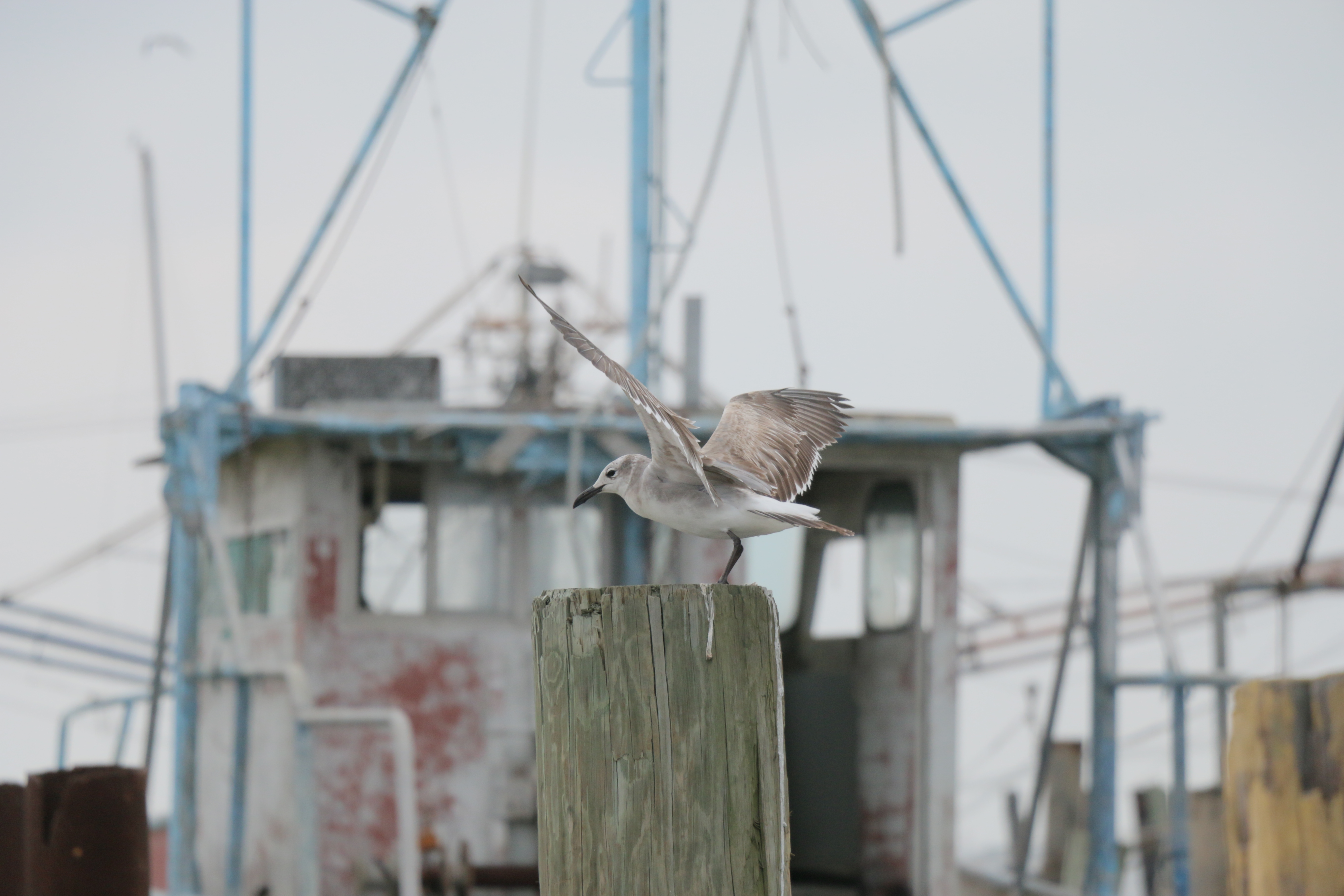 A seagull sits on the docks of Grand Isle. Fisheries and wildlife appear to be recovering from the effects of the BP oil spill.

Chuck Perrodin, public information director of Louisiana’s Coastal Protection and Restoration Authority, said BP didn’t want to listen to the people on the ground who said the spill was worse than they were letting on. In mid-April, it was estimated that the leak at Deepwater Horizon was releasing 1,000 barrels of oil into the gulf on a daily basis. By June, that figure had [skyrocketed(http://www.washingtonpost.com/wp-dyn/content/article/2010/06/15/AR2010061504267.html) to anywhere between 35,000 and 60,000 barrels a day.

“It’s hard to say they lied, but it sure looks like they lied. There was misinformation given out, there was information that was kept from us,” Perrodin said. “They weren’t telling the truth and they wouldn’t listen to what we were saying, and then they tried to put the whole PR spin on it.”

Paskewich, on the other hand, said he was disgusted by the media’s one sided coverage of the spill, though he acknowledged that BP could have done more to maintain its credibility with the public.

“It painted such a negative picture when you’re talking about death and destruction,” he said. “Behind the scenes, out of the public’s eyes, there are a lot of people who want to do the right thing.”

In addition to rallying thousands of responders, BP made use of mechanical barriers, dispersants, wildlife rehabilitation trailers and the Clean Gulf Associates $20 million oil storage barge. BP also drilled a relief well to intercept some the oil before it could flow into the Gulf of Mexico, according May 2010 press release.

“They mobilized and did, from a response point of view, what they needed to do to try to minimize and mitigate the spill the best they could,” Paskewich said. “Behind the scenes, out of the public’s eyes, there are a lot of people who want to do the right thing.”

Perrodin said the coordination and communications systems established during the Deepwater Horizon blowout should make it easier to manage the cleanup response if and when there is a similar disaster. Still, he hopes the $20 billion settlement against BP will help ensure that the oil industry as a whole does better in the future.

Grand Isle residents like Bladsacker agree, but for them the threat isn’t over. The local restaurateur said she worries that there could be another spill of the same magnitude at any time.

“I didn’t have anything good to say about BP and I still don’t. I think they failed as a major oil company to do right by the people who lived here,” she said. “I mean, they were digging deep in that ground, and it did a lot of damage.”