The People of Louisiana Tell the Story of Nature, Tragedy and Hope 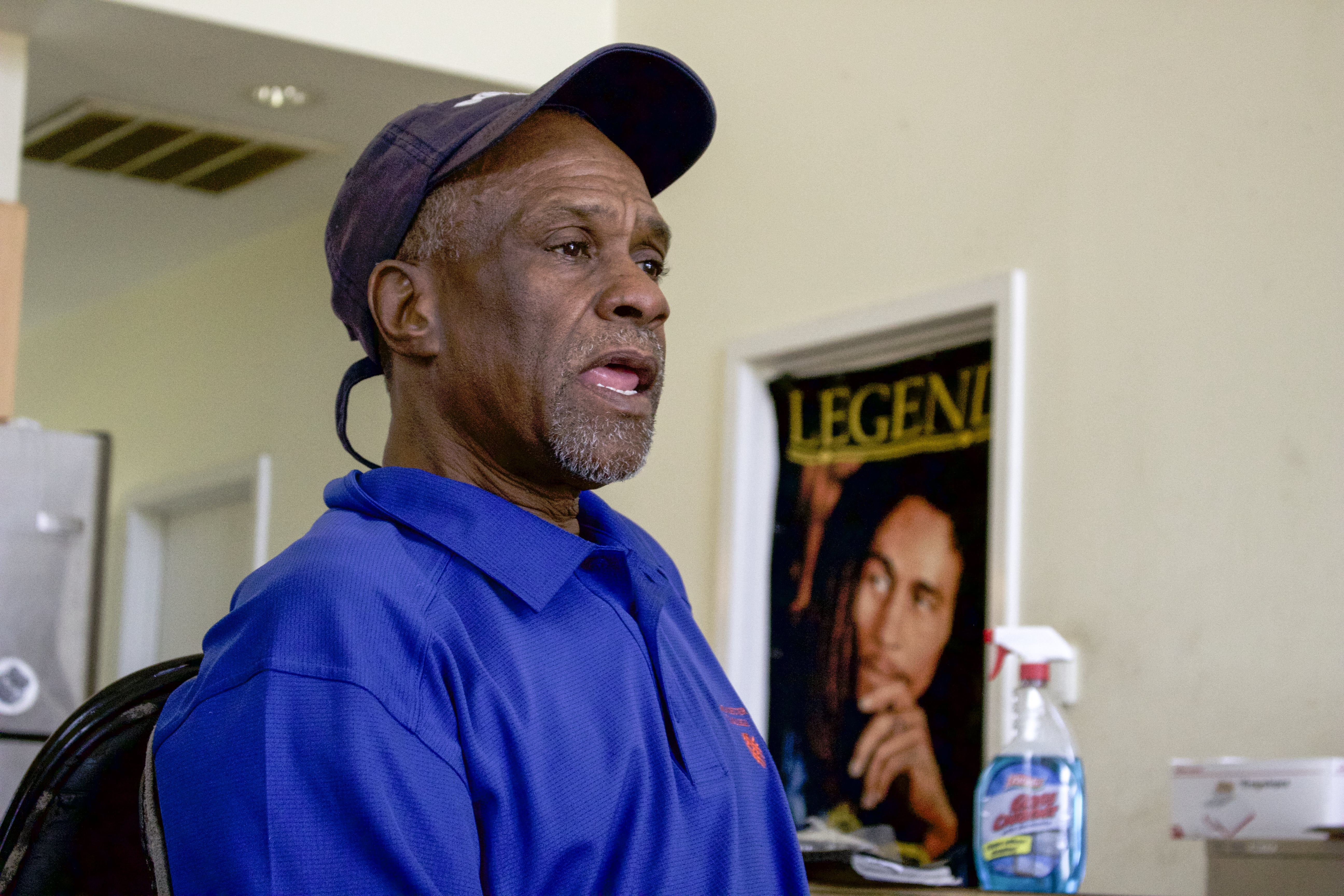 Robert Green sits in his house on Tennessee Street in the Lower Ninth Ward. The area is considered “ground zero” in the catastrophe that struck New Orleans after Hurricane Katrina in 2005. Green remembers it well. He lost his 73-year-old mother, Joyce, and his three-year-old granddaughter, Shanai, on the roof of their home, which tore from its foundations, and floated down the street with the flood. Green and his family had lived in the house since 1967. Now, Green helps in rebuilding the community, which still feels the effects of the storm. Many people were displaced, having no home to return to in the aftermath.

Darryl Malek-Wiley of the Sierra Club talks about symbols that mark houses across the Lower Ninth Ward in New Orleans. They were used to keep track of people following Hurricane Katrina. The top is the date, the left is the military unit that checked the house, the bottom is the number of bodies found and the right is whether anyone went in. He said there is now a culture around the symbol, which has become an icon of the disaster. The rescue effort was criticized for being horribly inadequate, leaving many stranded, especially the elderly and ill. Many of these people relied on their neighbors to save them. 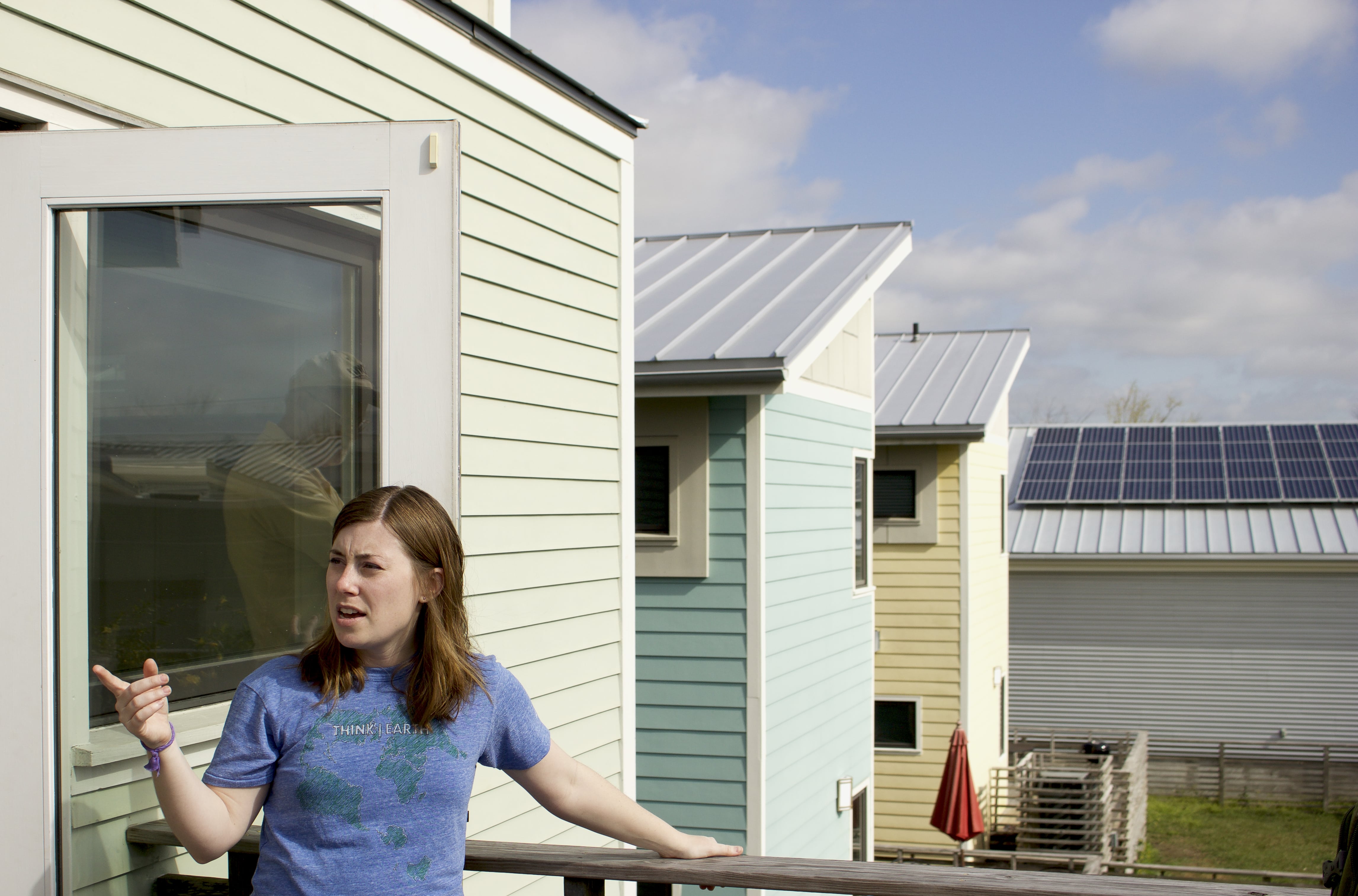 Michelle Pyne points to LEED Platinum certified homes in the Lower Ninth Ward. She is the director of the New Orleans branch of Global Green, a national environmental non-profit. Following the destruction of properties across the city during Hurricane Katrina, Global Green and other non-profits, including celebrity Brad Pitt’s Make It Right, have built houses that are more environmentally sustainable and safe from flooding. After Katrina, many of the residents of the Lower Ninth Ward did not come back and as homes have been rebuilt the neighborhood’s racial and economic characteristics are changing. 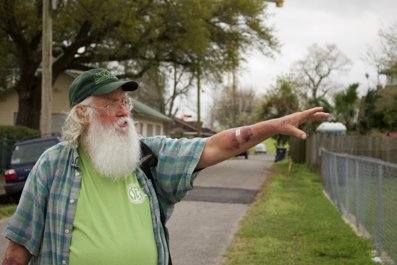 Darryl Malek-Wiley of the Sierra Club points to one of the many homes rebuilt after Hurricane Katrina in the Lower Ninth Ward. He works with non-profits in New Orleans as a senior environmental justice organizer to restore the city. He and others want to create a sustainable community here to reduce energy use, which contributes to global climate change through the burning of fossil fuels like oil and gas. Climate change predicts severer storms as a consequence of human-caused air pollution, but the Lower Ninth Ward is increasingly becoming an example of how a green future may look. 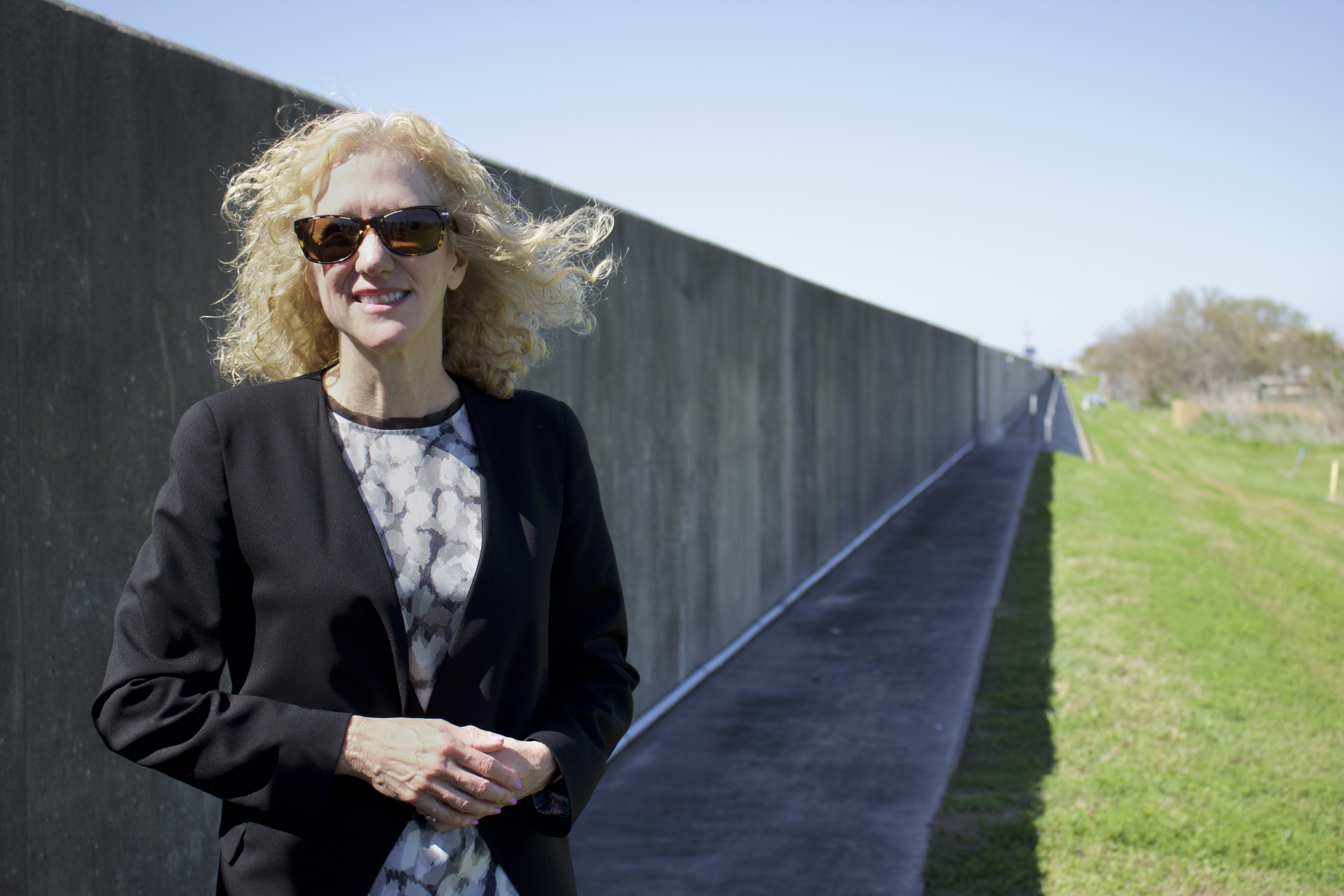 Sandy Rosenthal stands at the site of where the London Avenue Canal breached and floodwater stampeded through the Gentilly neighborhood in New Orleans following Hurricane Katrina. As the founder of Levees.org, she erected the world’s first levee museum to educate others about failures in the levee systems built by the U.S. Army Corps of Engineers. The failures, she said, are the reason why Katrina was such a disaster, killing thousands and causing severe damage across the city. The Corps received over $14 billion to rebuild the system, but changed the system’s name from “flood protection” to “risk reduction.” 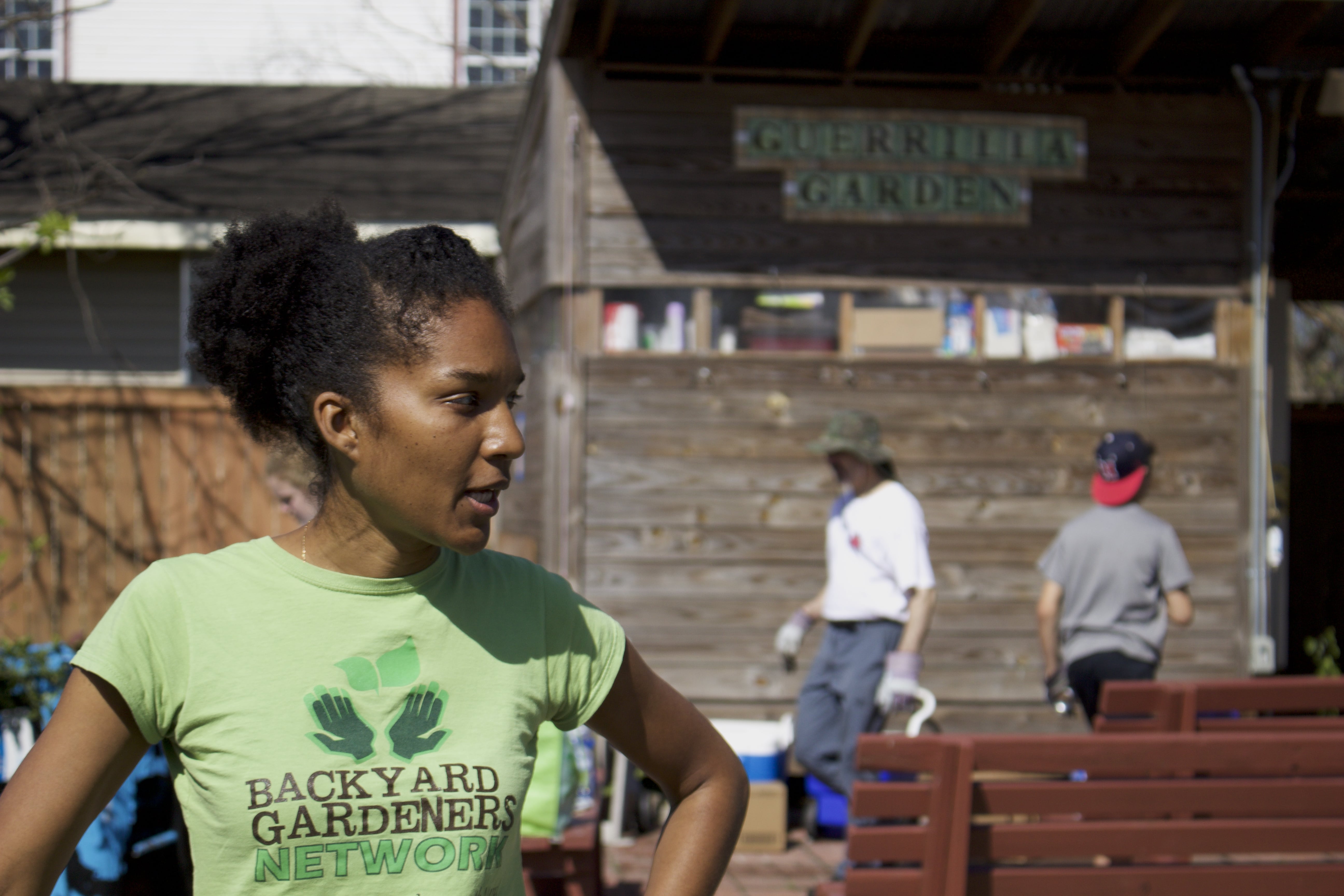 Jenga Mwendo guides a group of volunteers tending a community garden in the Lower Ninth Ward. Following Hurricane Katrina, she returned to her native New Orleans from New York City and started the garden in 2009 on what had been a vacant lot. The garden, she said, is meant to build community around the culture and tradition of growing food, which is deeply rooted in the Lower Ninth Ward. Mwendo said an old resident used to throw seeds here hoping they would grow into new plants and watched as others harvested what he grew. 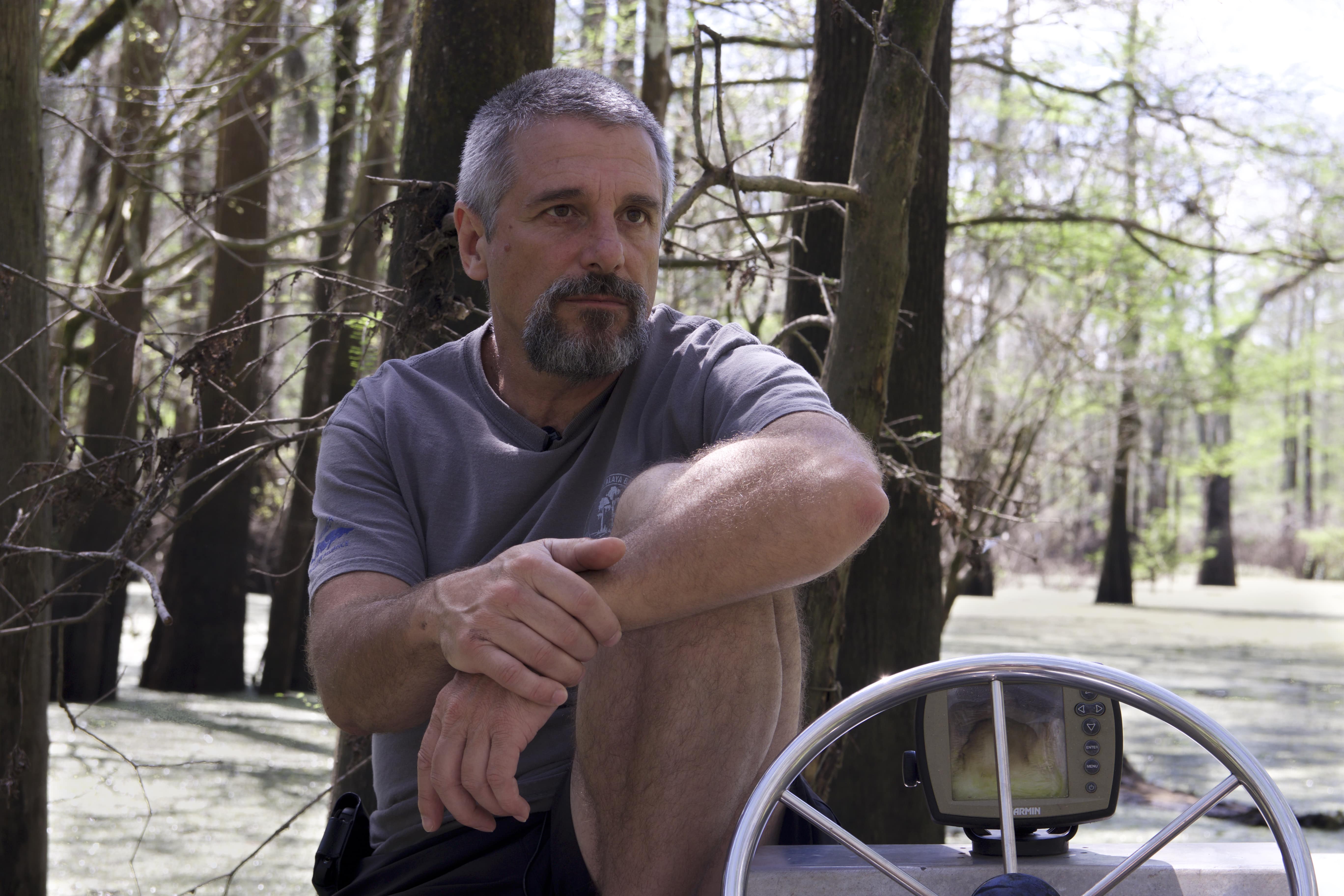 Dean Wilson sits on his boat between cypress trees in the Atchafalaya River basin. Once a commercial fisherman, he became the Atchafalaya Basinkeeper to protect the 1.4 million acre basin, which faces threats from canal dredging by oil companies, logging for cypress mulch and pollution from chemical runoff, oil waste and littering. Over-sedimentation, he said, is another hazard as the swamp fills in with mud. By nature, the Atchafalaya River would have become what the Mississippi River is today, except for the controls the U.S. Army Corp of Engineers imposed on the flow of water where the two rivers meet upstream. 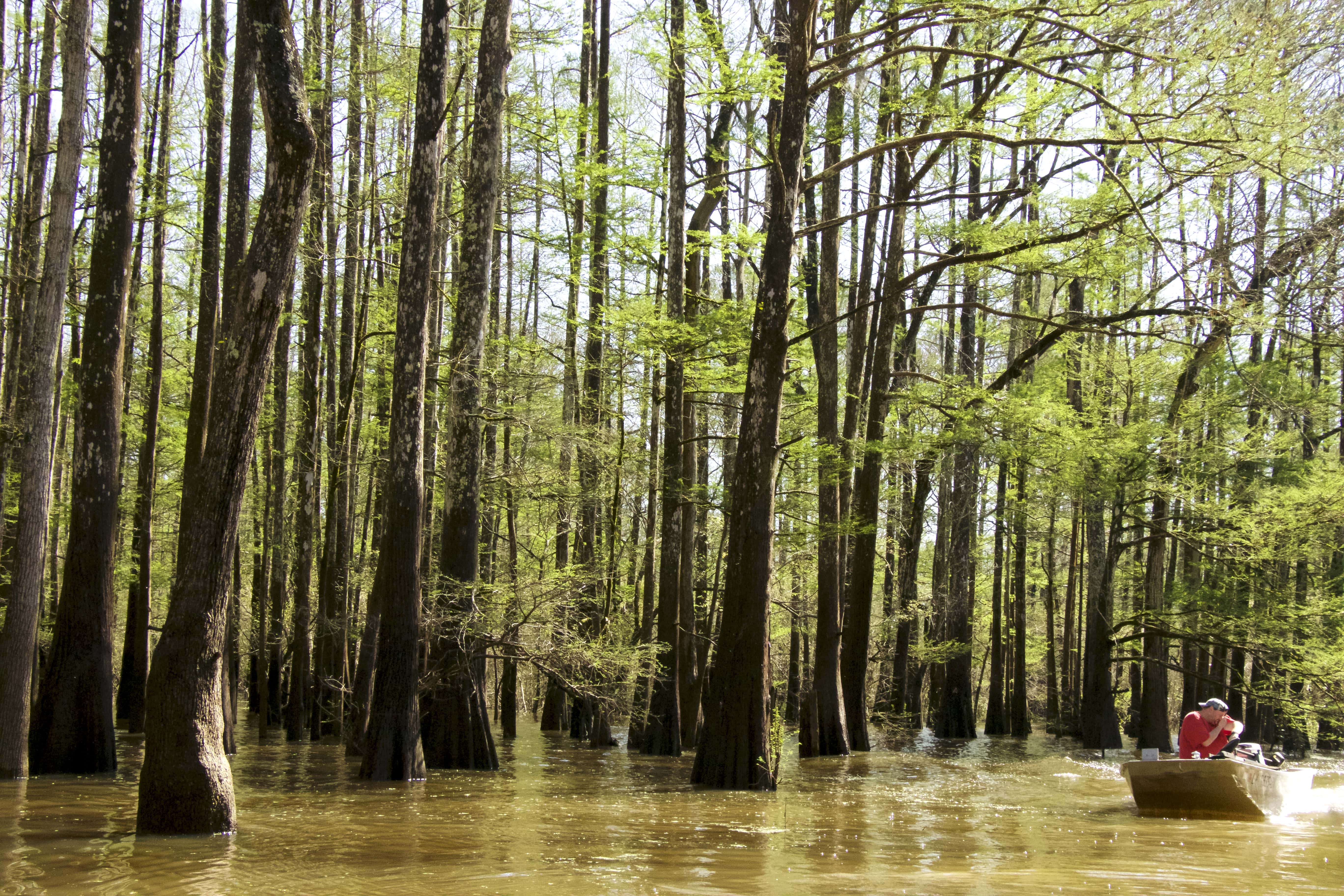 A fisherman drifts through the Atchafalaya River Basin. Communities of French colonists often called “Swamp People” settled in the basin during the late 18th century and adapted their lives to the wetland environment. What followed was the birth of a distinct Louisiana “Cajun” culture, known for its food, dialect and music. Living in the swamp is a challenge, with regular flooding often decimating homes, but the basin boasts over 100 species of fish, crawfish, shrimp and crab for fishing and a unique landscape. 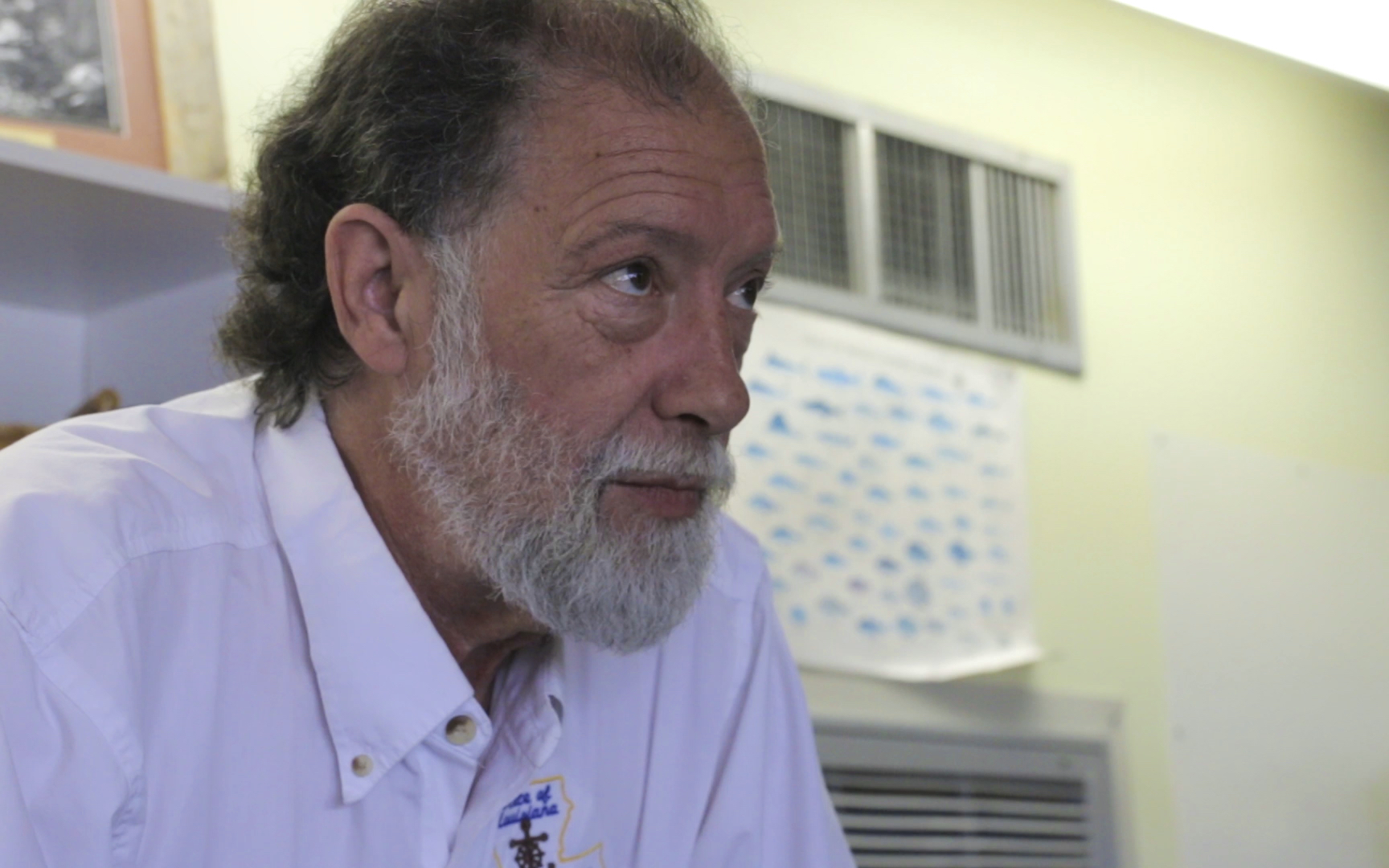 Wayne Keller says his home insurance is 12 times greater than it was when he moved to Grand Isle. The island faces significant risks as sea levels rise and severe storms eat away at its coast, but Keller said it’s worth the risk, despite those who insist he should move to the mainland. Living on the island is a different way of life, he said, and anyone who goes hungry on Grand Isle is a “lazy sucker” because there’s plenty of fish and shellfish around to eat and sell. The island thrives on the seafood industry, but Keller admits that the 2010 BP oil spill weakened people’s confidence in eating anything that came from the Gulf of Mexico. 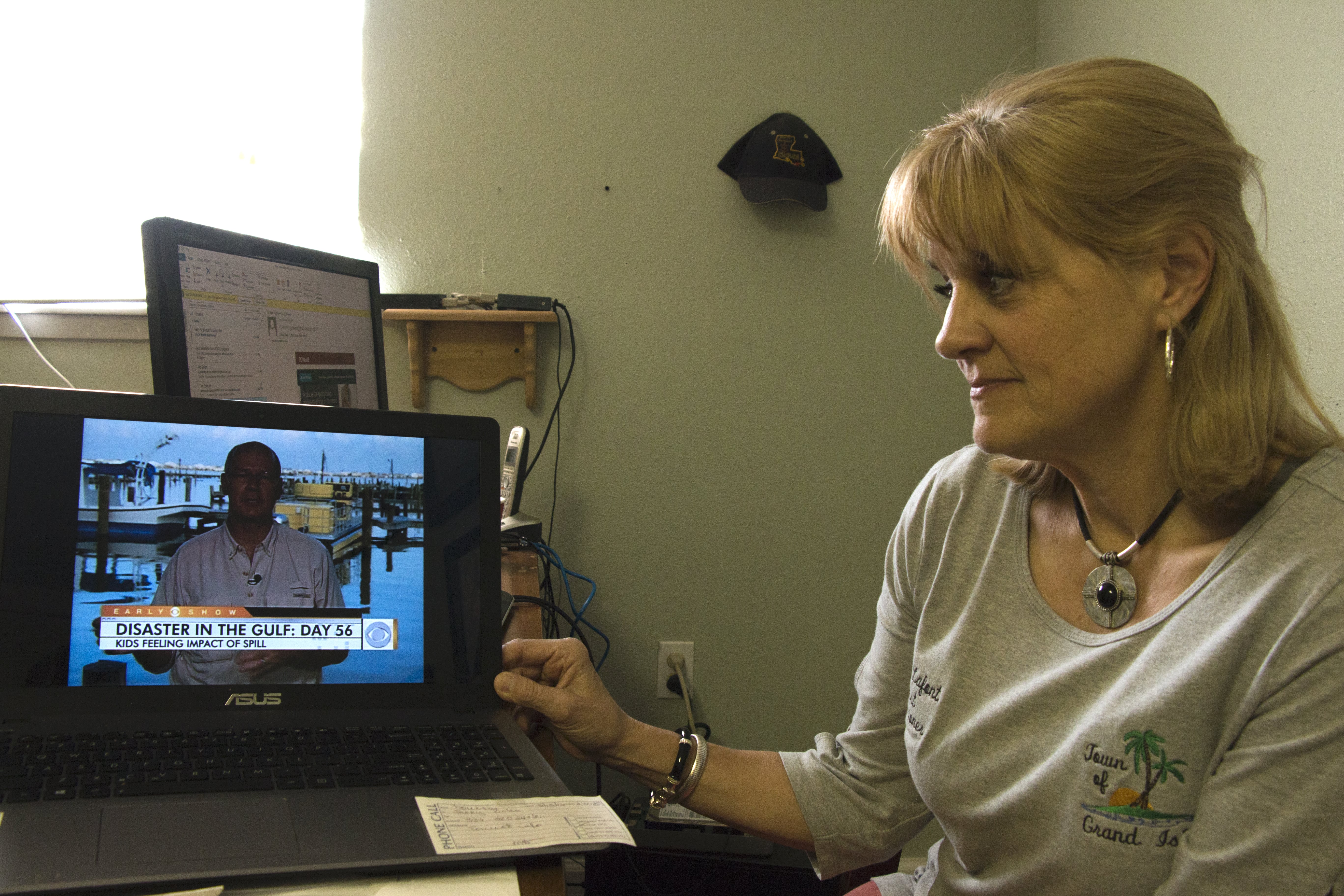 Louise Lafront watches Day 56 coverage of the BP oil spill. She said Grand Isle has a problem with drugs and her own children were “drug heads.” Today, she takes care of her 16-year-old granddaughter, Natalie, who lost her parents to drugs, her home to Hurricane Katrina and her beach to the oil spill. As Natalie prepares to go to college, Lafront said she is terrified and will not be able to afford the cost. Many grandparents on Grand Isle, she said, are raising their grandchildren. 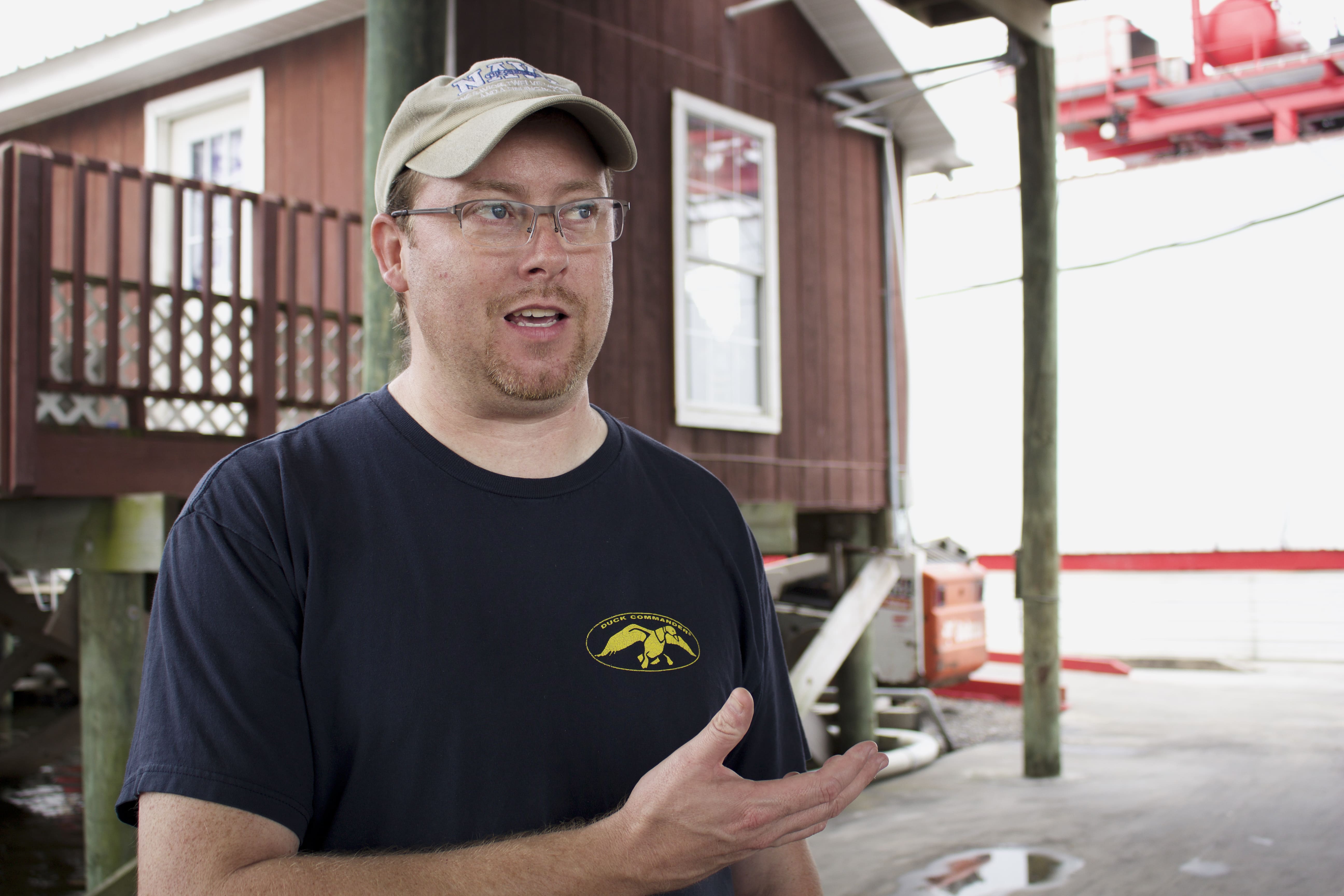 John Boss says Katrina was an “act of god,” but the 2010 BP oil spill was an act of human negligence. He serves as the lead pastor of First Baptist Church in Grand Isle, the only inhabited barrier island in Louisiana. During Katrina, the people of the island were among the first to experience the hurricane’s destructive force as it hit the state’s coast. Grand Isle was also at the front lines of the BP oil spill that spewed 4.9 million barrels of oil into the Gulf of Mexico, leading to a frantic and prolonged cleanup effort on the island that left many residents shaken. 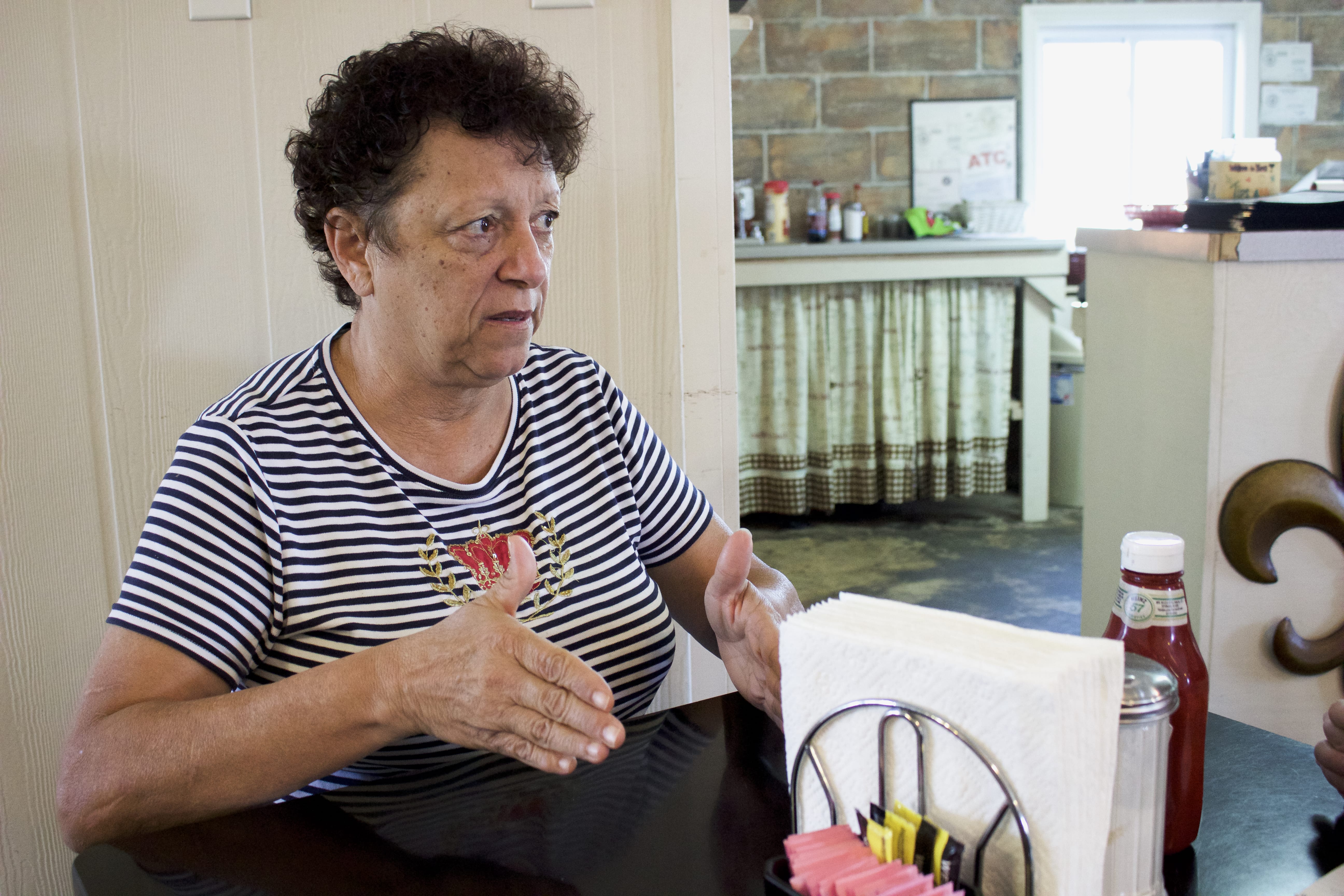 Leoda Bladsacker sits at a table in her restaurant on Grand Isle and describes how upset island residents were during the 2010 BP oil spill. She grew up on the island and was there when the spill brought both an overwhelming amount of oil to the Grand Isle shore and hundreds of outsiders who, she said, distressed the community even further. Bladsacker remembers airplanes flying above spraying dispersants to control the oil and she worries the chemicals worsened conditions for her husband, who recently died of cancer. She dreads the prospects of another disaster. 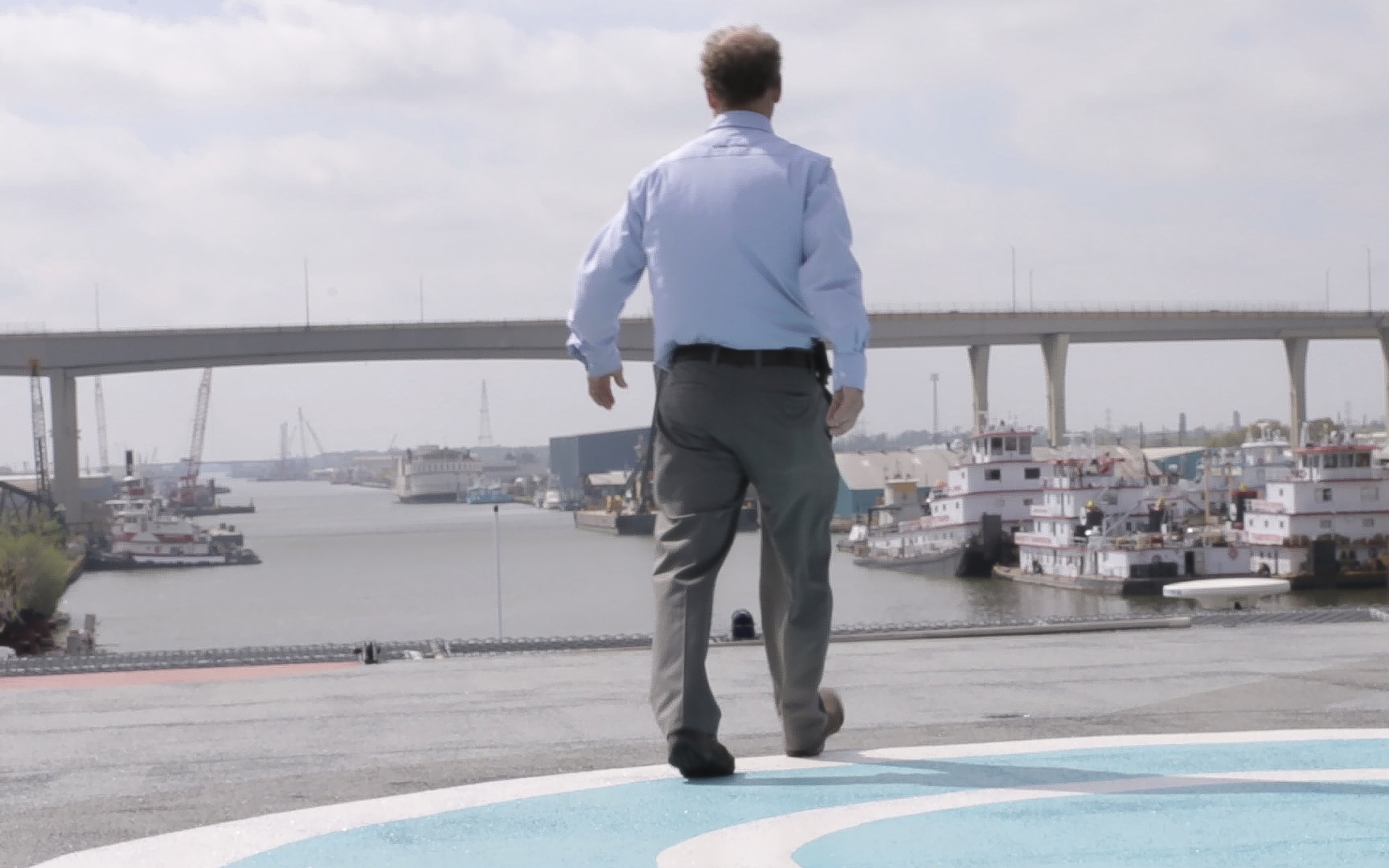 Frank Paskewich, the president of Clean Gulf Associates, walks on a helicopter pad atop the agency’s oil spill recovery barge. Clean Gulf is financed by the oil industry and this vessel is deployed throughout the region when needed, including the 2010 BP oil spill. Skimmers on the barge collect any oil and store it in the 250 storage barrels on board. A 12-person crew runs the vessel, while eight deck hands run the skimmers and clean the debris that may come on board. Every Monday morning, the barge is tested to make sure it’s ready for the next oil spill. Paskewich said the company has yet to have a down day. 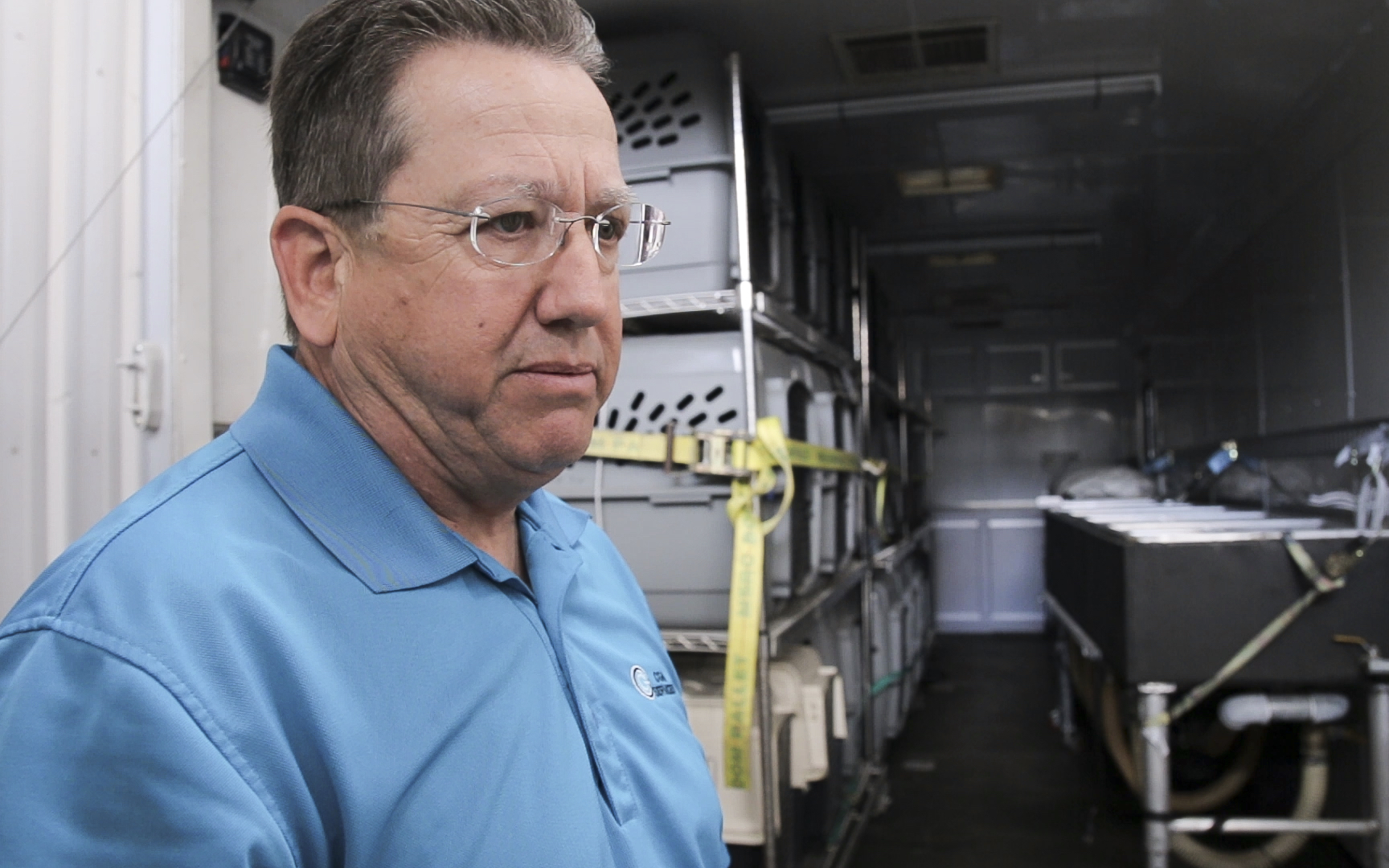 Frank Palmisano, vice-president of Clean Gulf Associates, points to cages inside an agency van. He said this is an intensive care unit for birds that wash up on shore covered in oil after a spill. Workers pump the birds’ stomachs out in case they ingested oil. The birds are left in the cages for a few days to calm them down and then workers clean them and release them back into the wild. Over the years, Palmisano said Clean Gulf has accumulated tons of equipment, including rinse tables and toy ducks washed up ashore, from one job to the next. 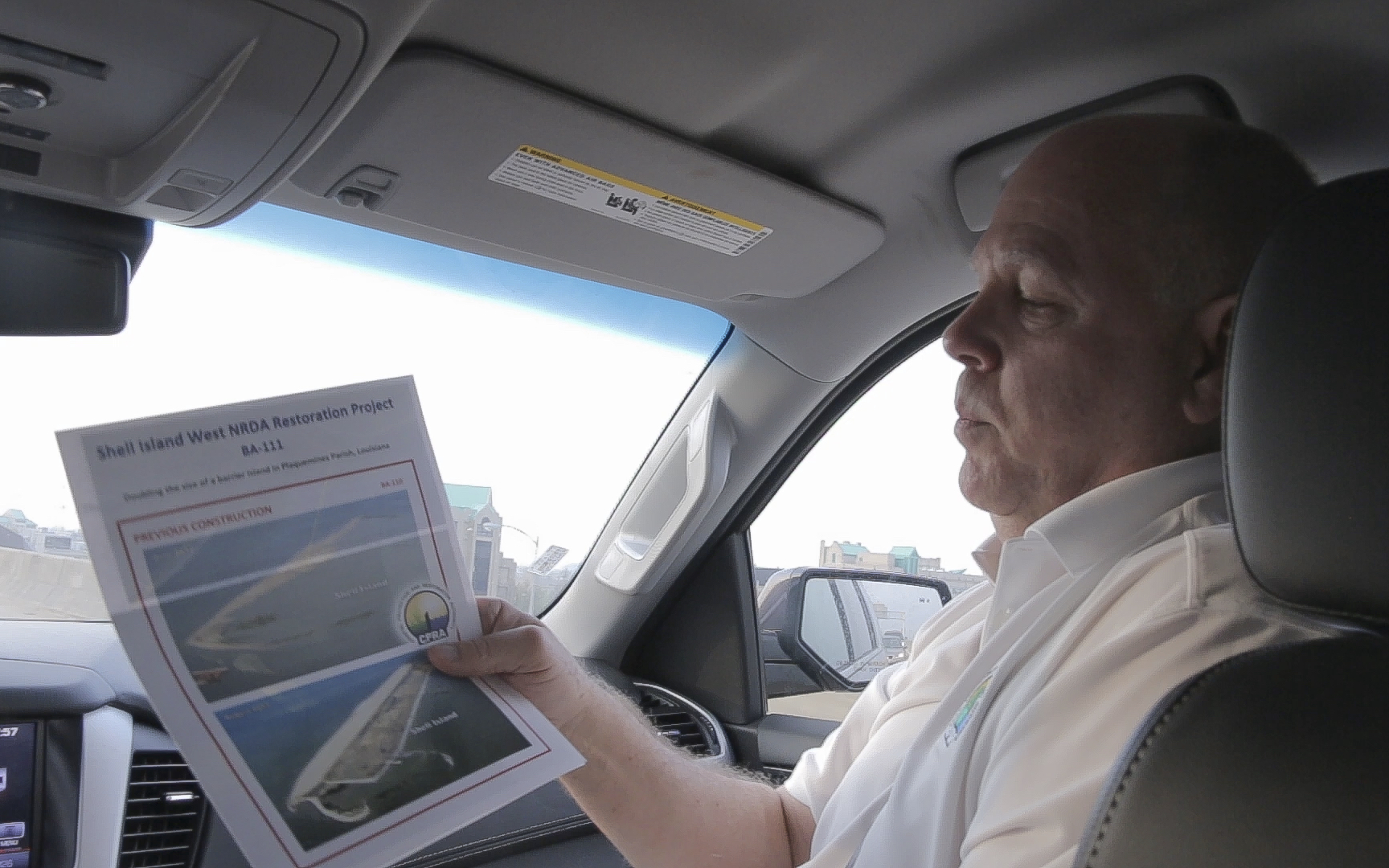 Chuck Perrodin explains the Shell Island project, which is helping to rebuild the Louisiana coast. Hurricane Katrina changed his life, he said, recalling the food scarcities following the storm that prompted him to procure Twinkies for his mother. After that, he left his job as a radio reporter to become a spokesman for Louisiana’s Coastal Protection and Restoration Authority because he wanted to make more of a lasting impact. He said the coast has lost land since the 1930s that would be equivalent to losing the area of five boroughs of New York City by almost seven times. Now the CPRA is building back disappearing barrier islands such as Shell Island in the expectation that these islands will serve as a buffer for future storms. 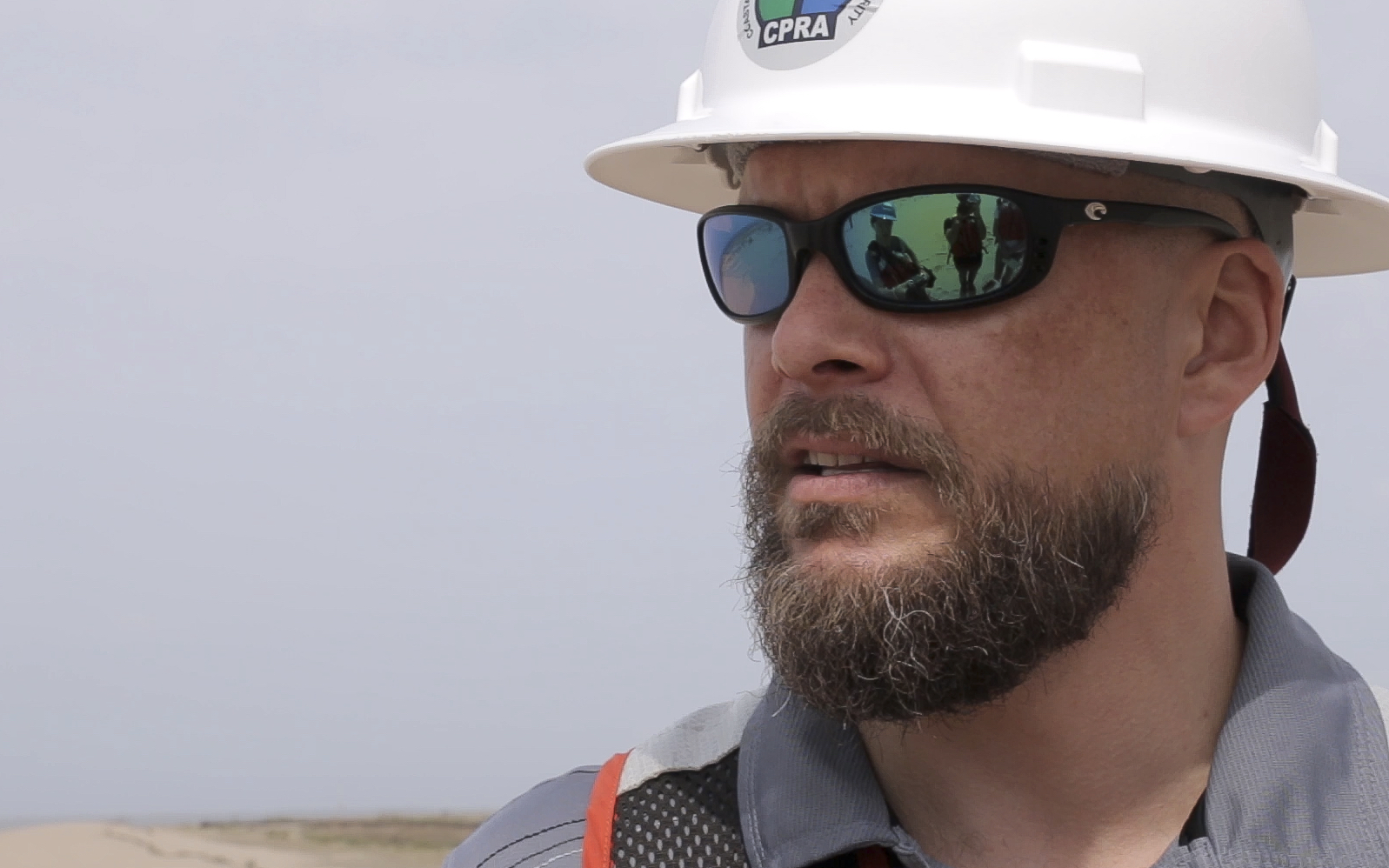 Chris Allen stands on man-made barrier island and jokingly says no one ever thinks building a barrier island is crazy. As a coastal resource scientist for Louisiana’s Coastal Protection and Restoration Authority, he said barrier islands provide coastal protection from hurricanes and flooding, while adding habitat to the already shrinking Louisiana coast. The state is spending over $50 billion on more than 100 projects to restore the coast, which has disappeared at alarming rates due to oil canal dredging, sea level rise and lack of sediment spewing out from the Mississippi River. 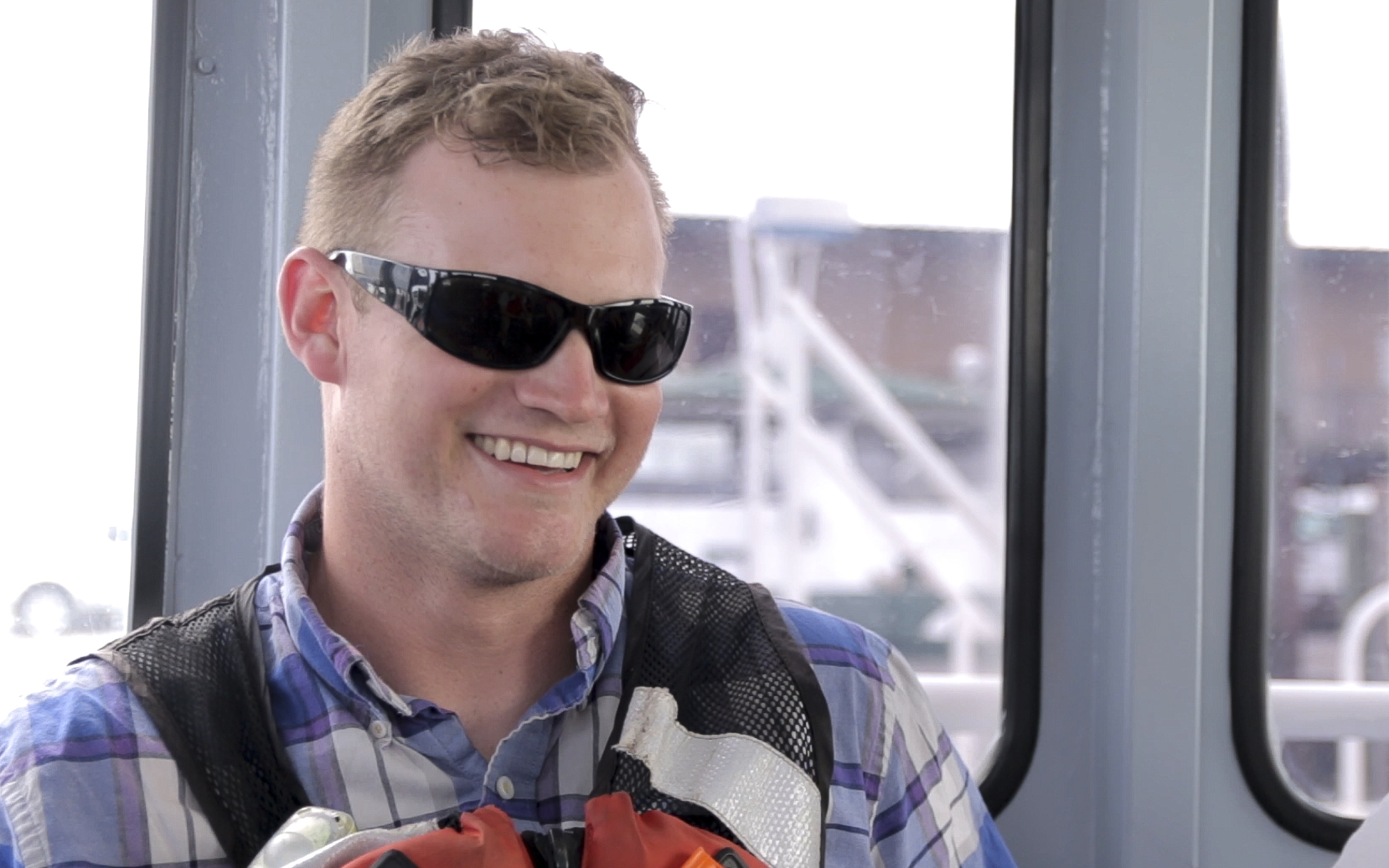 Jimmy Hill is on a boat visiting Shell Island on his day off. He is an engineer from Rhode Island working for Great Lakes Dredge and Dock Corp., which has the contract to rebuild Shell Island to 600 acres in size. He spends most of his day in a wet suit making sure the dredges are pumping the right depth of sand to build the island. It’s grueling work, but he feels he’s doing something worthwhile, especially since the barrier islands will both provide new habitat for wildlife and protect the coastal communities of Louisiana.