Sandy Rosenthal wants to buy a house with a gaping hole in its roof. There’s no sidewalk leading to the front door, only thick grass surrounding the structure. A dead tree remains across the decrepit road.

The house has been abandoned for more than 11 years.

Still, it speaks of a history this quiet community of New Orleans knows all too well. The backyard is the site of a levee breach in the London Avenue Canal that brought water storming through the neighborhood during Katrina. The people who once occupied the house were trapped in the attic as the water rose so high they were forced to cut their way out through the roof. There, they waited for help to come.

Rosenthal wants to turn the house into a museum memorializing the disaster. Next door, she erected a levee exhibit and rain garden as a monument to the canal breach on a piece of land where another house detached from it’s foundation and floated away with the flood.

This is the world’s first levee museum. 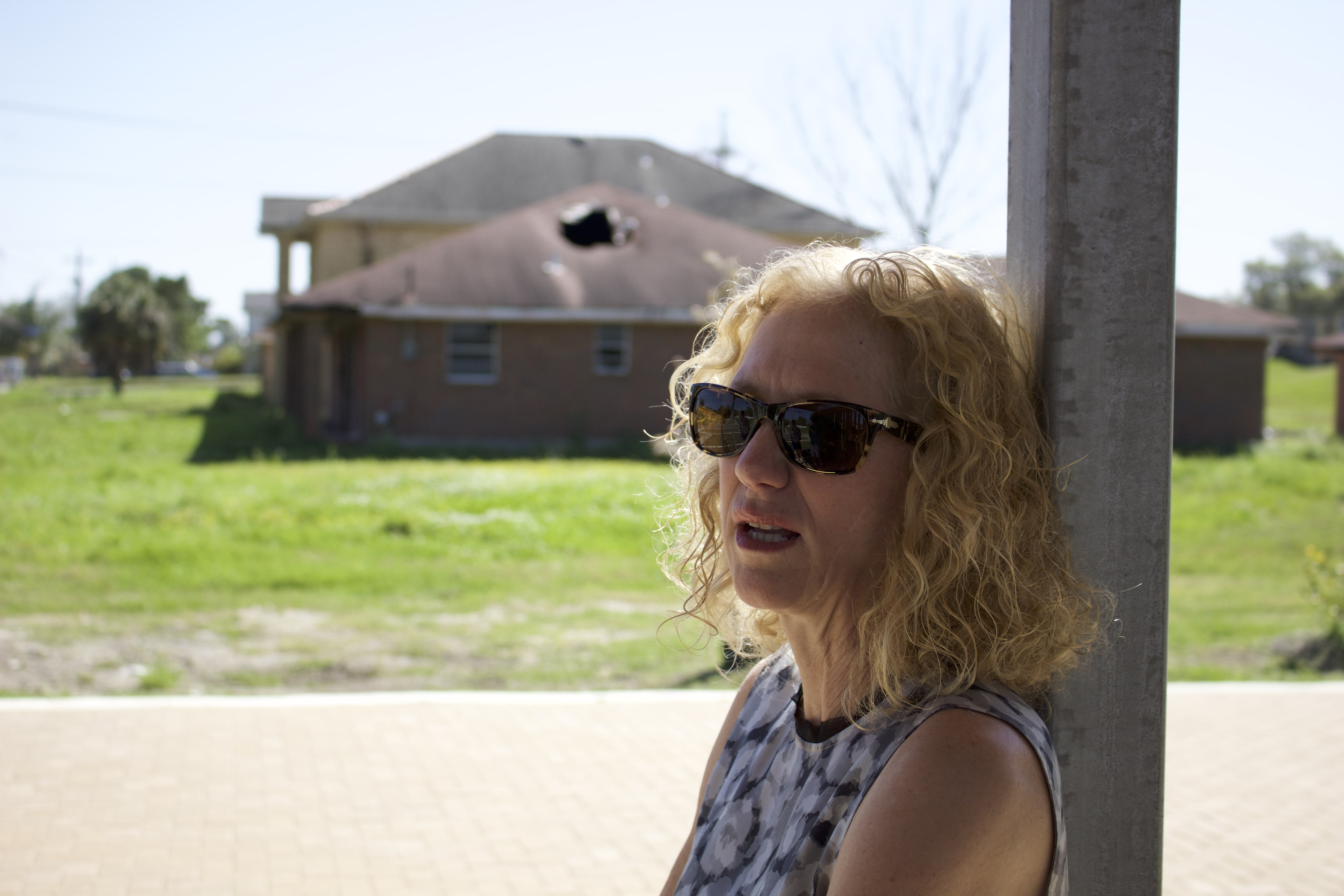 Sandy Rosenthal, founder of Levees.org, leans against a post in her outdoor levee museum and rain garden at the site of the London Avenue Canal breach. She wants to convert the abandoned house across the lawn into a museum to commemorate the disaster of Hurricane Katrina.

The U.S. Army Corps of Engineers built the levees that burst during Katrina and left the Crescent City underwater, killing nearly 2,000 and sparking a wave of uneasy distrust.

“This was a civil engineering failure,” Rosenthal said. “And not a matter of the city’s geography, not Katrina’s strength and certainly not any imagined local corruption.”

A lack of faith in the Corps, combined with the threat of climate change, has produced some uncertainty as to whether the Corps can prevent another Katrina.

“We’ve talked about climate change and the impacts on the planet will be large,” Darryl Malek-Wiley, an environmental justice coordinator for the Sierra Club, said. “The government says there will be four inches of sea level rise and some studies are saying there might be as much as 12 inches.”

The threat of more severe storms, Malek-Wiley said, is also a real concern, especially among the inhabitants of Louisiana, who are arguably some of the most vulnerable people in the country to climate change because of the state’s rapidly disappearing coast and constant flooding as result of relentless hurricanes, torrential rain and the city’s general “fish bowl” geology.

Corps spokesperson Ricky Boyett said Katrina’s destructive impacts were largely the result of levee breaches in the city, which were due to “design failures” in the levee systems the Corps built.

“The levees just didn’t do what they were supposed to do,” Boyett said. “Something that people don’t understand is that no matter what we do, there will be residual risk. It’s just inherent in living down here.”

But Rosenthal said the failures themselves were a result of cost cutting by the Corps, which decided to use less steel when driving sheets of metal beneath the levees for reinforcement, As a result, they were not deep enough to withstand the force of turbulent waters. Additionally, the Corps failed to ensure that the levees themselves would not erode when the water rose, as many did during Katrina. 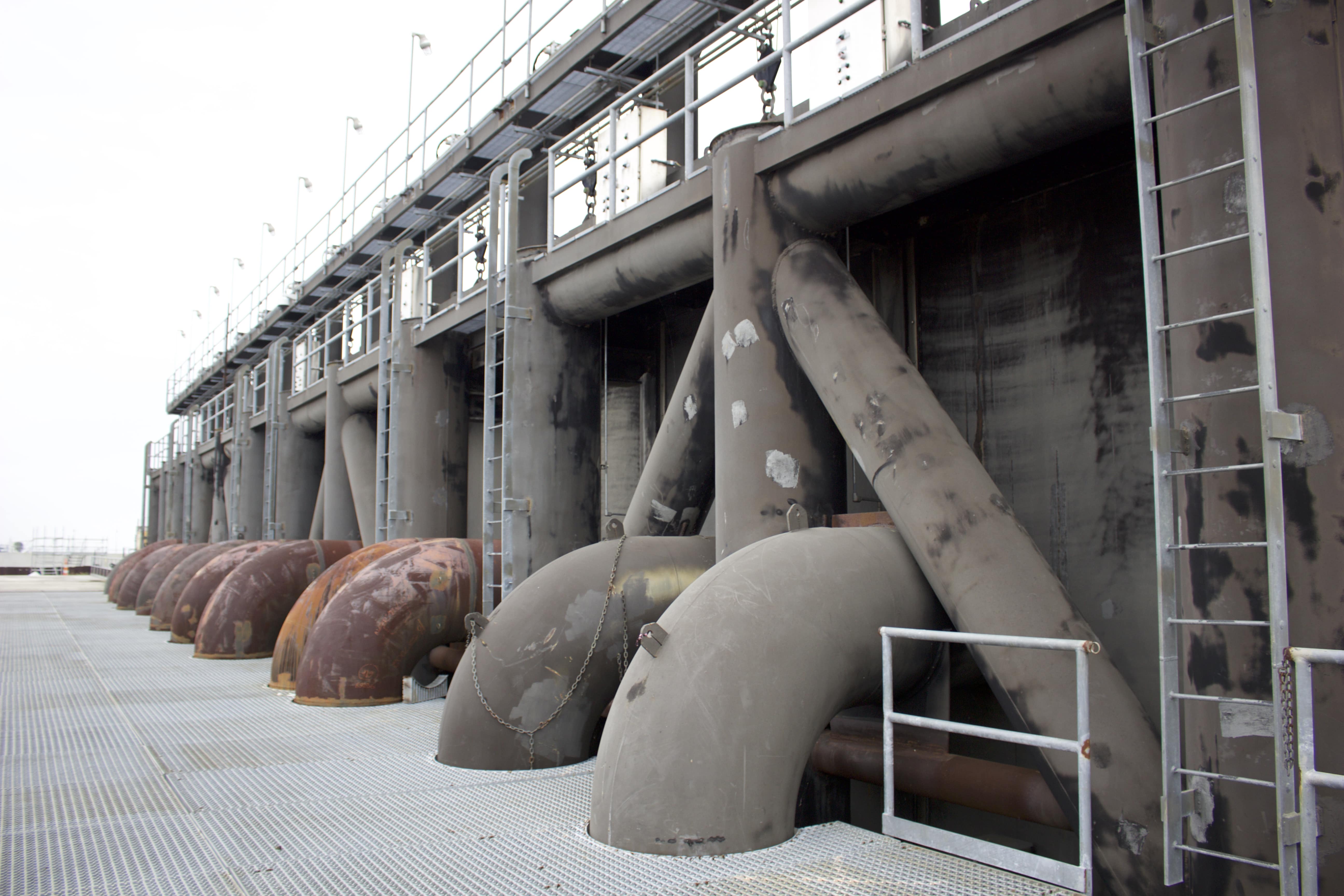 The hurricane cost the country $151 billion across Louisiana and $75 billion in New Orleans alone, becoming the costliest storm on record. In the aftermath of the tragedy, the Corps decided to change the name of their “flood protection” systems, not just in New Orleans, but also across the country. Now, they are “risk reduction” systems.

“Risk reduction is not something you can build and walk away from because you have to be continually engaged,” Boyett said. “ Tomorrow is going to be different from today.”

Malek-Wiley, Rosenthal and Boyett agree that this alternative language relates to the uncertainty of natural events in the state and a lack of confidence in people’s abilities to predict and prevent their impacts.

“The key message that we talk about more than anything is that this is a good system. Be confident that it will do what it’s supposed to do,” Boyett said. “But, there will be a bigger storm than this system is.” The Corps received upwards of $14 billion following Katrina to build a stronger system.

Melissa Deas, an institute associate at the Georgetown Climate Center in Washington, said this puts New Orleans in a unique position to rebuild in a new and progressive way. 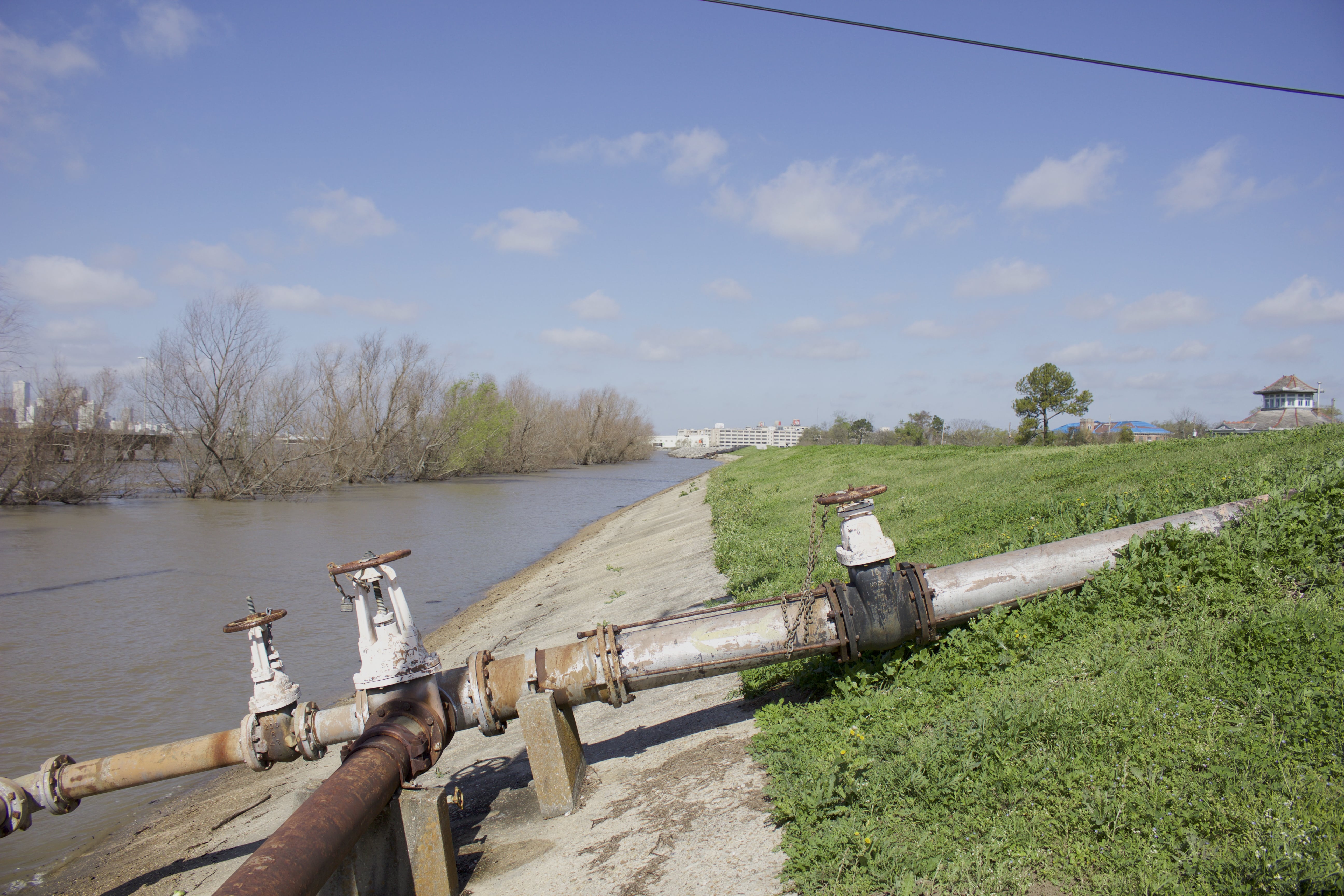 A levee separates the Mississippi River from the Lower Ninth Ward in New Orleans. Concrete at the base of the levee was added after Hurricane Katrina to prevent it from eroding.

“Right now funding from the federal level for resiliency in places like New Orleans is being put through many grated channels,” Deas said. “Which allows for piecemeal progress, but not the sustained progress we need.”

While many Louisiana policymakers have not welcomed the idea of climate change even after Katrina, Deas said, it is up to local governments to drive change when it comes to adapting because they know where flooding happens and who it affects most.

After Katrina, the floodwalls were rebuilt to be resilient, Rosenthal and Boyett said, which means they won’t fail when water overtops them. The new floodwalls were designed in the shape of an upside-down letter T so they don’t fall over or break, Boyett said. Metal sheets were driven deeper underground and the earthen embankments of the levees themselves were mixed with clay and other material as “armoring” to prevent erosion.

These resiliency measures, among many, were taken to ensure that areas under the protection of levees would be able to withstand a 100-year storm, Boyett said, which is a storm so strong that it has only a one percent chance of occurring in 100 years. These storms bring 16 feet of floodwater to any particular area.

Despite the improved floodwalls, Boyett said areas would still flood, but it wouldn’t be catastrophic. Up to 88 pump stations, with five specifically designated for use during hurricanes, would be able to pump water out into Lake Pontchartrain on the north side of New Orleans from levee-lined canals that capture water runoff throughout the city. Repairs on these pump stations following Katrina cost over $123 million, according to the Corps.

The five hurricane pump stations push the equivalent of the amount of water held by an Olympic-sized pool out of the city and into Lake Pontchartrain every 3.6 seconds, Boyett said.

The 350 miles of levee in the city, unlike the floodwalls that sit on top of them, were not rebuilt to withstand future sea level rise due to climate change and they face the threat of subsidence as the Louisiana coast disappears under water. 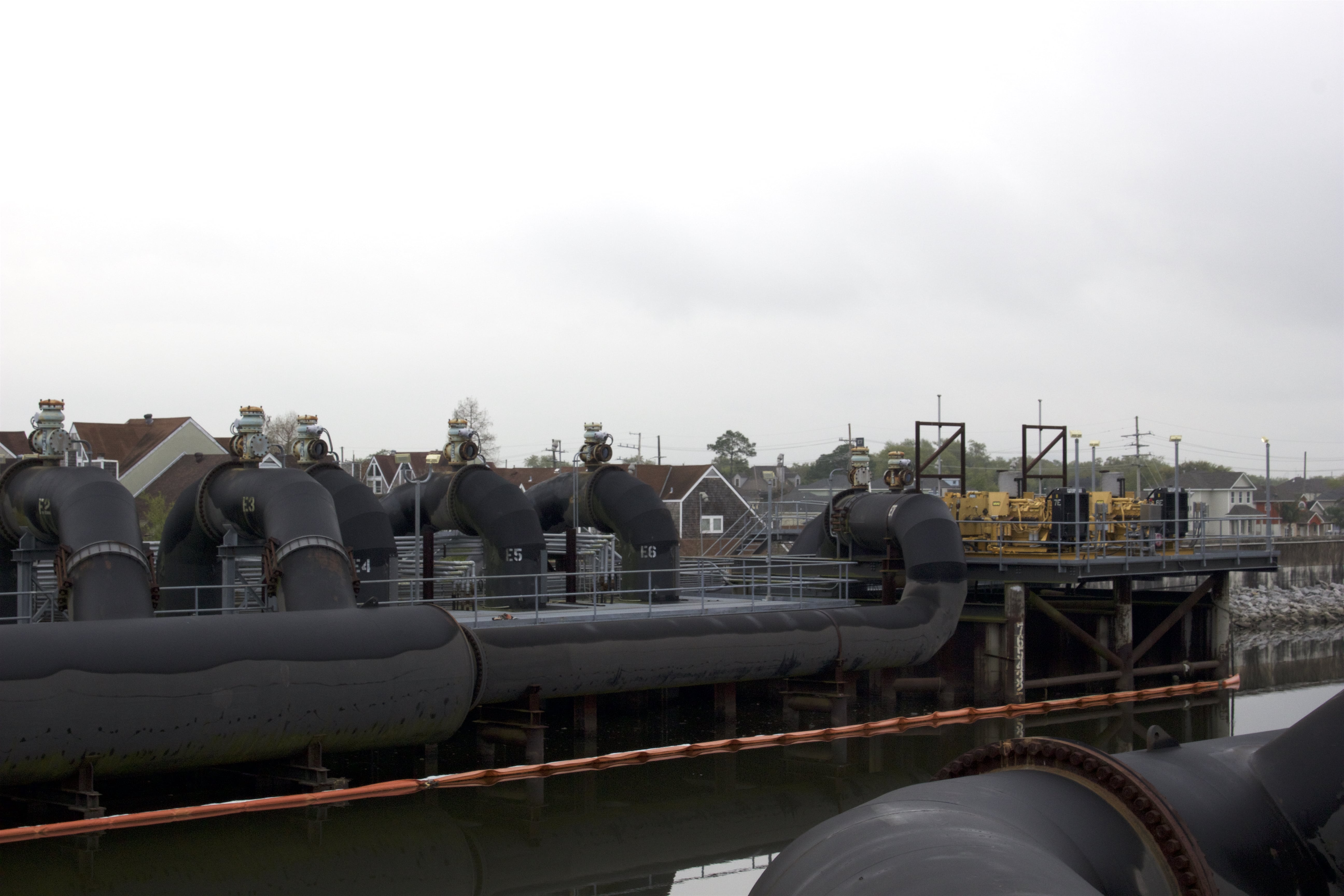 “You’re looking at subsidence being 10 to 20 times greater than sea level rise,” Boyett said. “We had to figure that into building the new system.”

Since the levees are made of earth, Boyett said the Corps could not rebuild them to withstand sea level rise and severer storms. Building the levees higher means using more space on either side, he said. Levees compress and sink faster under the weight of the earth piled up that is needed to raise them.

“You would continually be chasing that elevation,” Boyett said. “In the future, you would have to go back in and build them back up.” In the meantime, Boyett said the existing floodwalls wouldn’t topple over and the levees would not wash away with the next hurricane. While the city will rely on pump stations to prevent damaging floods, Boyett said the Corps is also working on building massive underground water storage systems in case the pumps can’t keep up with the storm surge.

Even though Boyett said the Corps would work with local governments when building levees and pump stations to combat hurricanes and flooding, more must be done to improve evacuation procedures during Katrina-like disasters.

Nearly 80 percent of the city’s population tried evacuating during Katrina with 10,000 taking shelter in the Superdome and tens of thousands remaining in their homes. The rescue efforts were criticized as inadequate, leaving thousands stranded for days with little food and water. The sick and elderly were abandoned, left with just the help of their families and neighbors for survival. Lawlessness took hold of New Orleans as looting and violence were reported in the midst of the chaos. 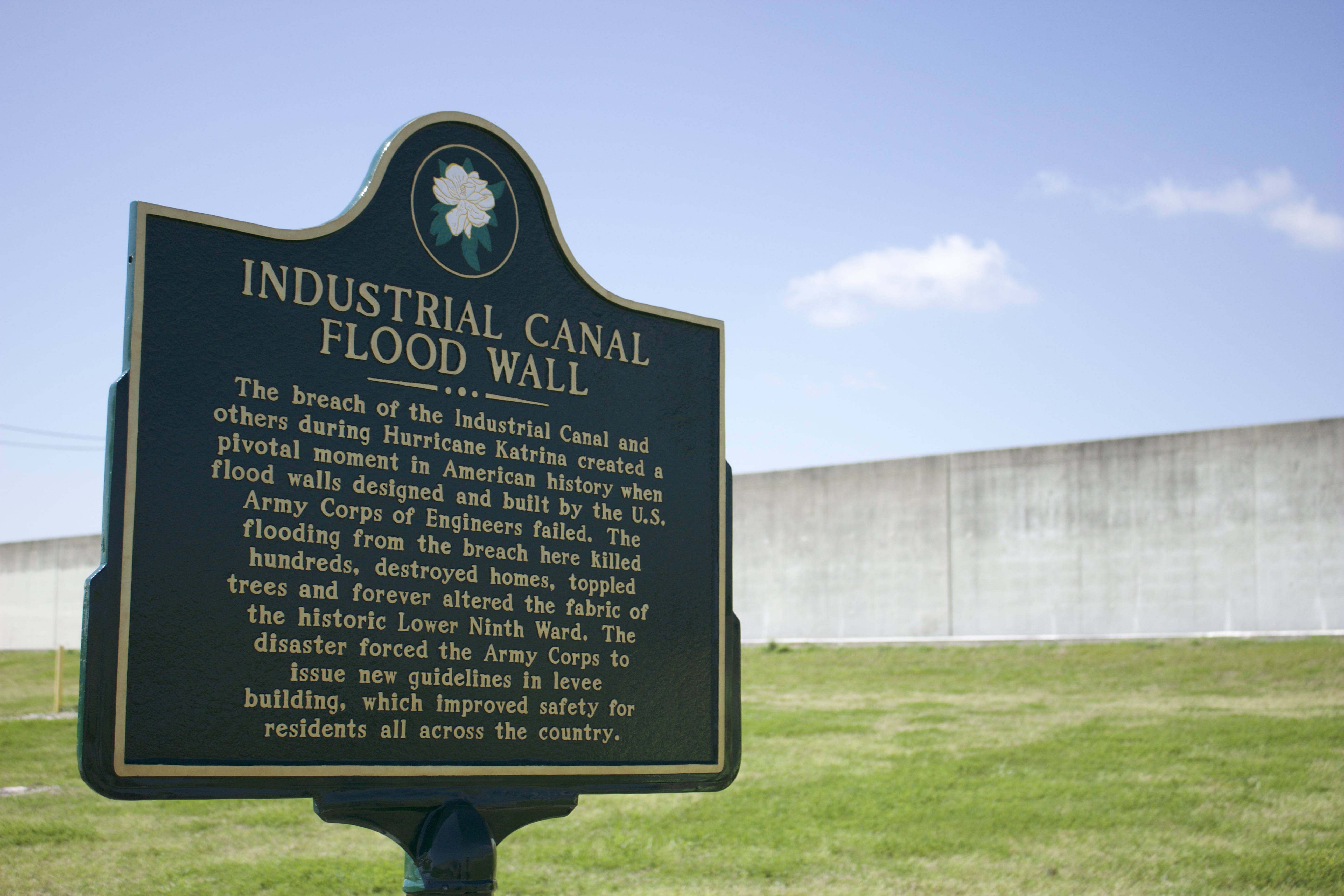 A Louisiana State historic plaque is displayed at the site of the Industrial Canal breach in New Orleans during Hurricane Katrina. The breach was especially devastating for the Lower Ninth Ward, decimating the primarily lower income community.

Years later, activists like Rosenthal continue to share the stories of the many who were devastated during Katrina. Community leaders united with Rosenthal to push for Louisiana State historic plaques on the site of both the 17th Street Canal and the London Avenue Canal breaches.

The words on the plaques were written with help from the residents of affected areas. They explain how the Corps’ flood protection structures failed and what the consequences were for New Orleans.

Rosenthal and her supporters raised $3,480 for both the plaques and worked with politicians to put them as close as possible to land owned by the Corps. They hope to place more across the city in upcoming years.

Even through her outreach, Rosenthal admits that she is very worried about the future of New Orleans with climate change, especially as sea levels rise.

“If everything south of us gets flooded, that also affects us,” she said. “My house might not flood, but all around me will flood. Eventually, we might be left on an island.”