The Lower Ninth Ward of New Orleans currently has less than one-fifth as many people as it did before Hurricane Katrina hit, and over 10 feet of water forced residents out of their homes.

Those U.S. Census figures in combination with the destruction, while devastating, has led the Lower Ninth Ward in a direction no one would have predicted before many of the traditional shot gun houses were wiped clean off their foundations.

“Some good things came from what happened in Hurricane Katrina,” said Darryl Malek-Wiley, an environmental justice associate representative for the Sierra Club. “The political wall came down.” With that wall removed, in addition to hundreds of physical ones down across the district leaving vast open spaces, there was finally room for the area to think about going green.

“The idea was building green and reducing the carbon footprint, not going back to the old houses that were energy inefficient,” said Robert Lynn Green, a Lower Ninth Ward resident. Without Katrina, “we would have had no reason. If you understand we had 4,000 houses, no vacant land, there would have been no reason to have such a project.”

Today, however, entire blocks are empty or only have one or two houses, leaving the district open for dozens of environmentally-motivated, non-profit organizations who have replaced what had been a trusting, family-centered community before Katrina. They volunteers and groups are beginning a new type of construction and restoration in the city. A green type. 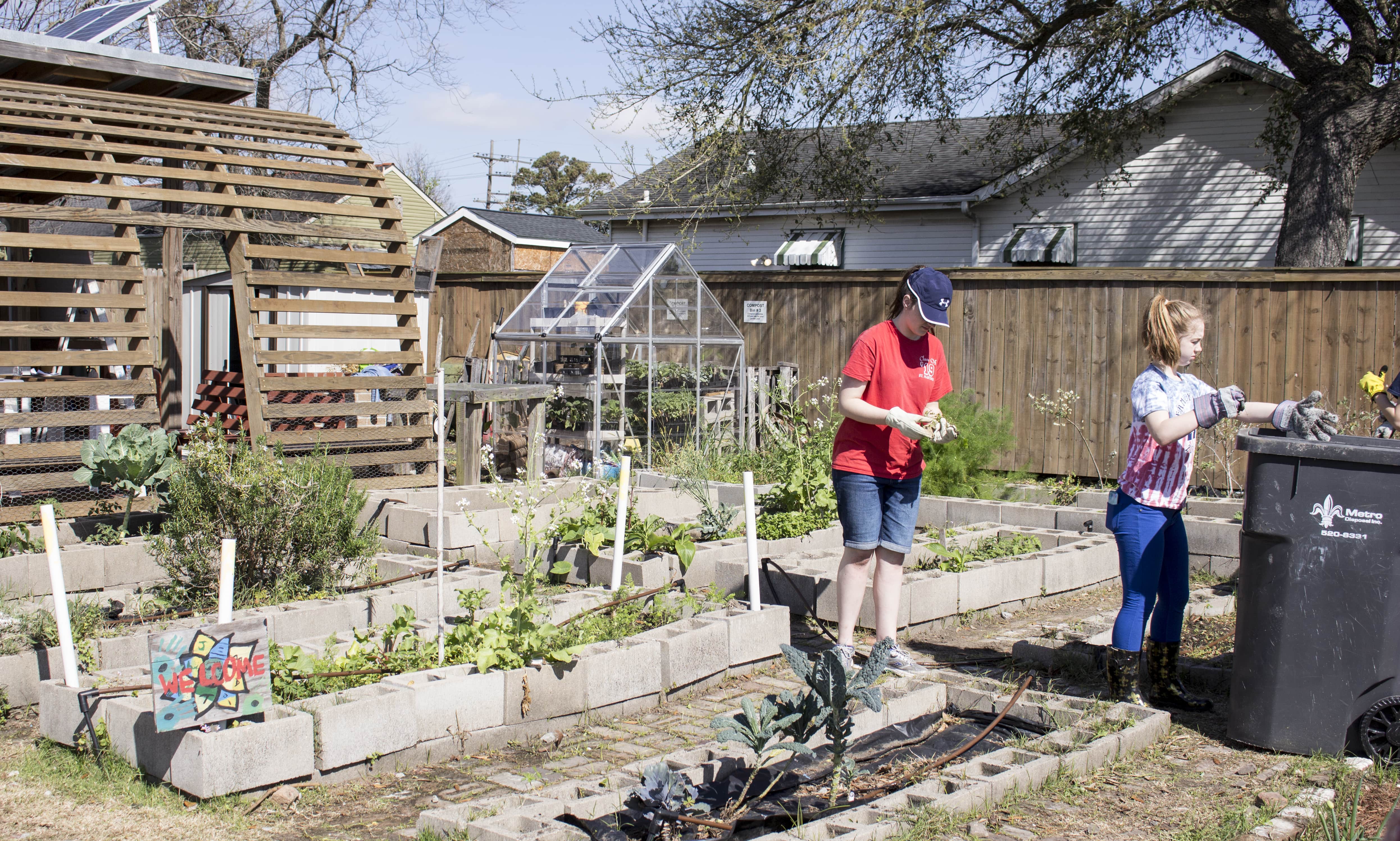 One of two community gardens established by the Backyard Gardeners Network in the Lower Ninth Ward of New Orleans since Hurricane Katrina. They provide a place for the community to strengthen its tradition of urban gardening in addition to education.

The Lower Ninth Ward now, has more solar panels than any other part of the city, according to Malek-Wiley.

Green currently lives in a neighborhood built by one such organization that has become the icon of sustainable reconstruction – the actor Brad Pitt’s Make It Right houses. With their bright colors, futuristic designs and stilts that raise the houses up well above the three-foot FEMA requirement, the 110 homes couldn’t look more different from their predecessors.

“If you look at the fossil fuels that we get away from with these houses… what they are doing with these houses is making a future, a better future, especially for my grandkids,” Green said.

The Make it Right Foundation plans on building a total of 150 homes, according to Malek-Wiley. These houses are set to withstand 160 mph winds, they all have solar panels and each one is required to have access to the roof in case the water level rises through the attics as it did during Katrina.

The homes are expensive by Lower Ninth Ward standards – $150,000 for a single family – but since electric and gas bills are so reduced, they will be less expensive for the residents to own.

Robert Green lives in a house built by the Make it Right Foundation. His previous home was swept away by flood waters during Hurricane Katrina.

“If you look at the simple fact of the matter that if you get a house like this, my electric bill is $54,” Green said. “A house not like this, it might be $300, so you wind up saving and benefiting the people in the houses.”

Several other organizations, like Global Green and Groundwork New Orleans, are also working toward the same mission. Global Green has put much of its resources toward developing sustainable building techniques that will work and last in the hot and humid climate of southern Louisiana.

“We need to build back sustainably, but sustainably for New Orleans,” Michelle Pyne, director of the Global Green New Orleans office, said. “This is a very different place than where most of the green building research and building has previously been done.”

Through experimentation and research, Global Green has designed net zero homes that feature a wall system for their houses that places the insulation on the outside so it can be popped off and replaced if there were to be severe flooding, Pyne said. The houses are all also built with a paperless wallboard design that reduces the potential for mold growth – a big problem in the humid environment.

“The Holy Cross neighborhood within the Lower Ninth Ward is a historic district, therefore there are additional codes and restrictions,” Pyne said. 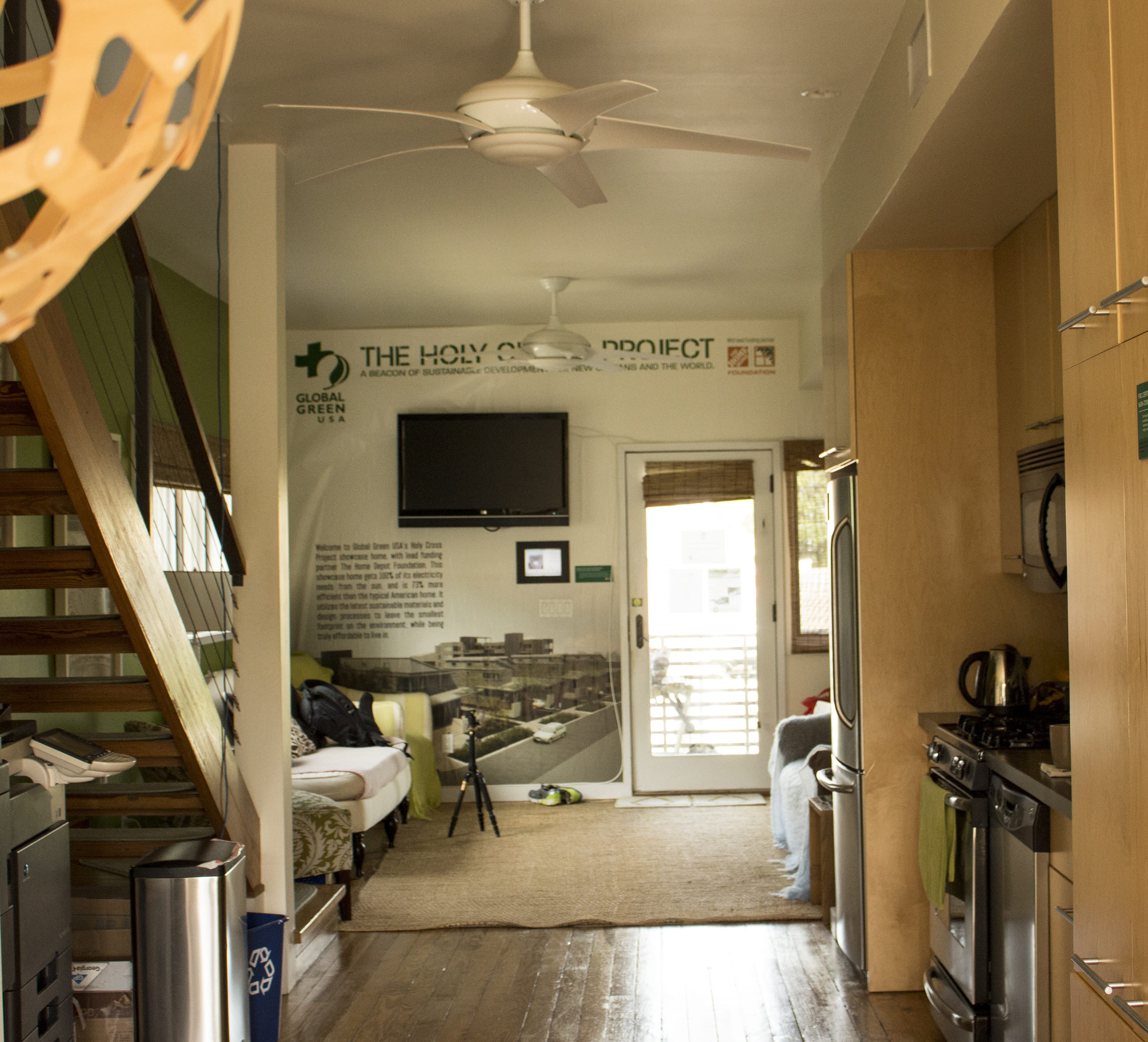 The Global Green single family homes in the Lower Ninth Ward are considered net zero, meaning they produce as much or more energy than they expend. The homes interiors are built with readily renewable and environmentally friendly materials and decorated with art made by local artists.

To accommodate, the houses are built as 21st century versions of the traditional shotgun home, Pyne said. To regulate the temperature of the homes, the longest axis is built east to west and the north side has lots of windows, while the south side has very few.

“Most of the people are very happy with their utility bills. Before Katrina they were paying several hundred a month,” said Ramiro Diaz of Groundwork New Orleans.

Despite the many new homes, there are hundreds that still stand vacant, vines growing across their crumbling exteriors. There are lots with newly constructed frames, abandoned and skeletal looking amidst tall grasses. There are lots simply fenced in with for sale or foreclosure signs limply hanging from a post.

“It’s contractor fraud,” Malek-Wiley said as he motioned toward a partially reconstructed, elevated house. “They will start work, and then just leave once they have the money.”

Private contractors haven’t been the only impediment to the return of the Lower Ninth Ward. Between the state’s Road Home Program which provides nowhere near enough money for a family to rebuild to the continual stalling of state funding for projects such as Global Green’s affordable apartment complex the reconstruction has been slow and unsteady. 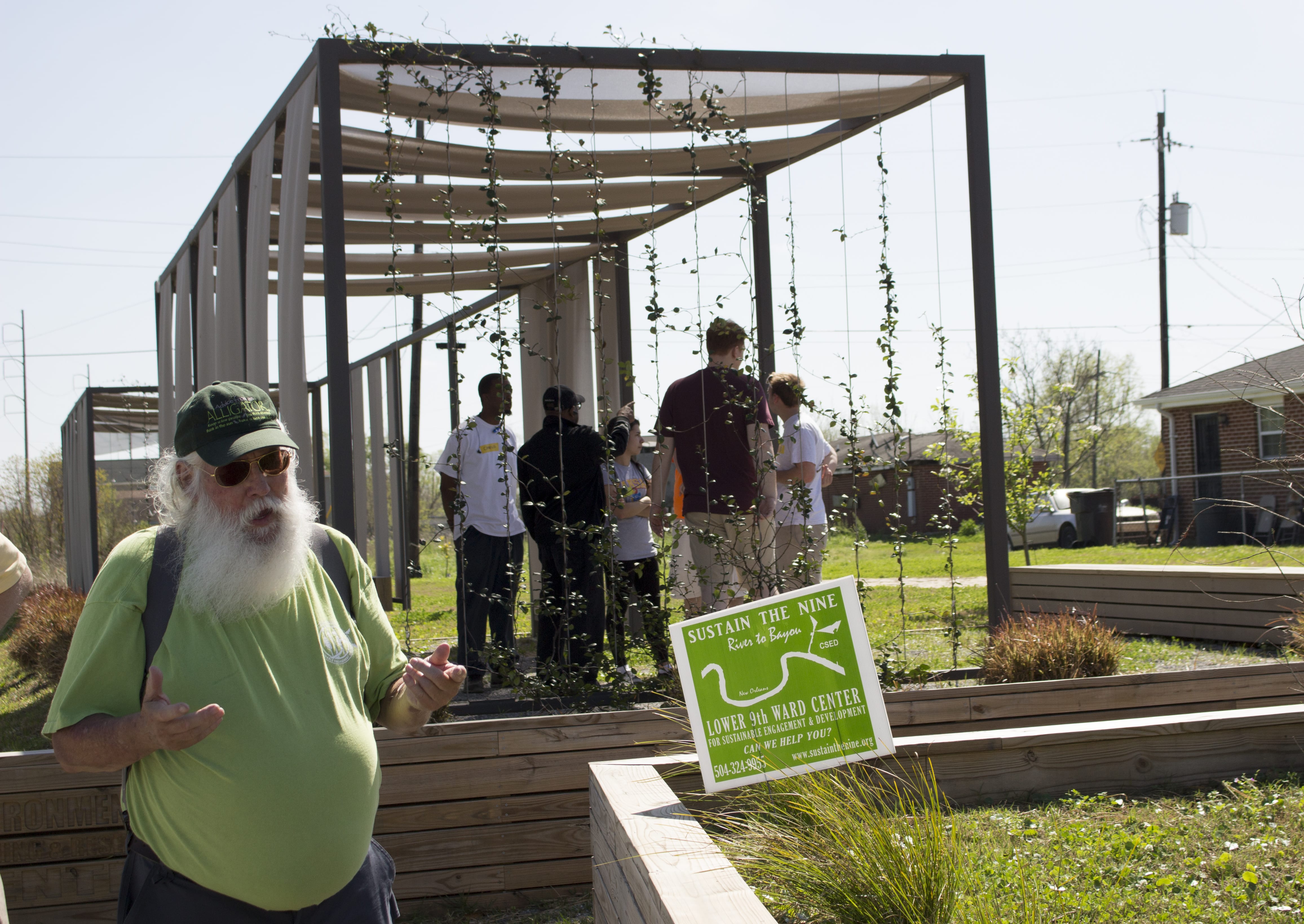 This outdoor classroom is located across the street from Bayou Bienvenue and it provides a space for volunteers and community members alike to learn about the ways in which the Lower Ninth Ward is rebuilding.

Despite setbacks, nonprofits have continued to push ahead.

Green education and community engagement, in addition to sustainable reconstruction, has been a theme across many of the nonprofits at work in the Lower Ninth Ward. Groundwork has gone about this by using local high schoolers to map out the broken infrastructure, catch basins, unsightliness and potential sites for rain gardens and parks.

Another nonprofit, Backyard Gardeners Network, has made reconstruction of outdoor spaces as their initiative. The group has established two community gardens in the Lower Ninth Ward that aim at not only rebuilding the culture of urban farming, but also a sense of community in the sparsely populated area.

Some nonprofits have also focused their resources on building back the wetlands that were once the dominant landscape in New Orleans.

The Lower Ninth Ward Center for Sustainable Engagement and Development (CSED) has been working to restore the 30,000 acres of cypress forest that made up the Bayou Bienvenue at the back end of the district. The wetlands were destroyed by continuous salt infiltration caused by a canal named Mr. Go which was built in the 1960s.

“The cypress would have helped buffer the storms,” Malek-Wiley said. 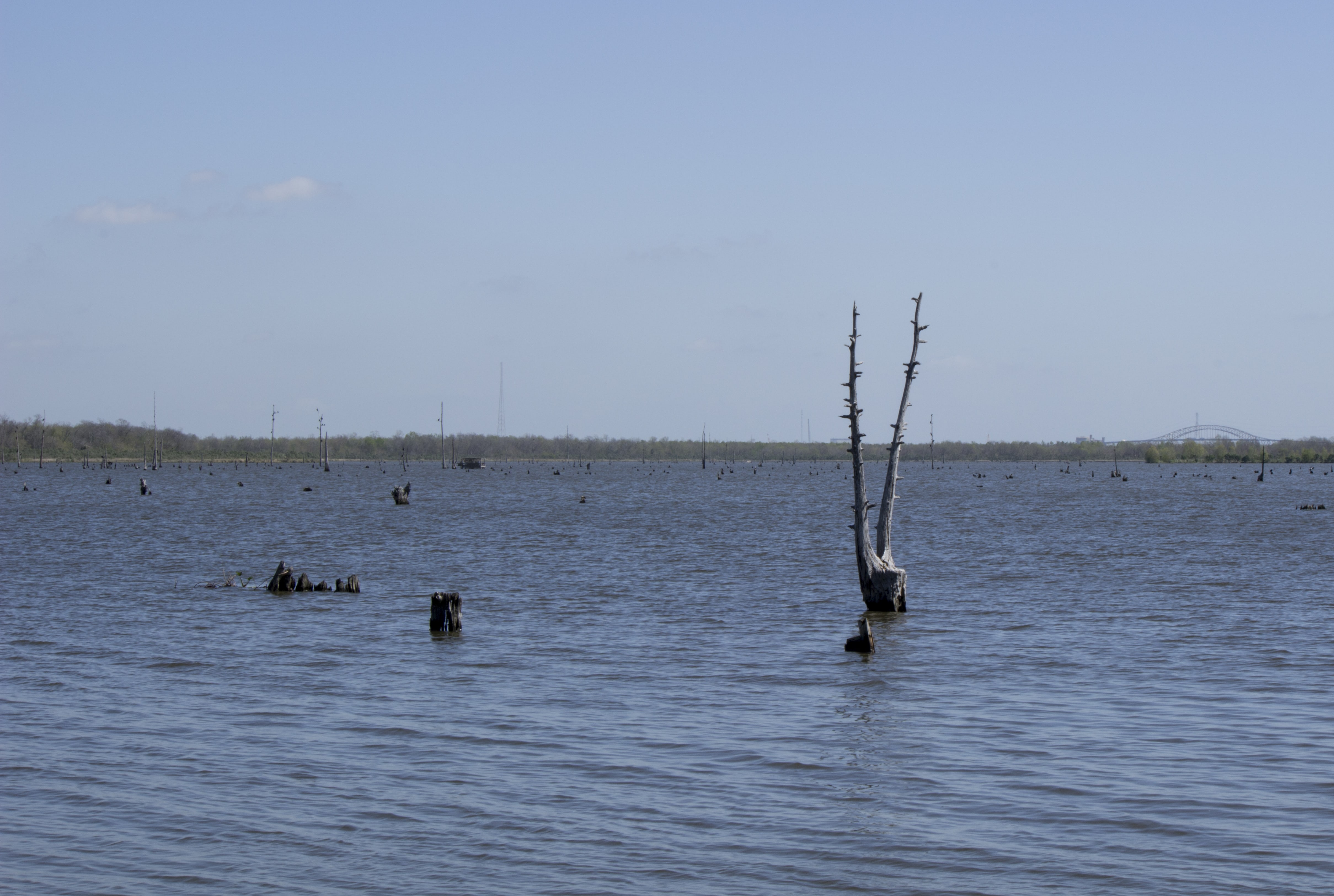 Bayou Bienvenue perches on the back of the Lower Ninth Ward of New Orleans. Once it resembled the thickly wooded Atchafalaya Basin. Logging and saltwater intrusion has left it open except for a few remaining dead tree stumps.

A dam has been built to block the salt water. CSED plans to begin building islands to replant cypress trees on as soon as the $3.1 billion necessary for the project becomes available, according to Malek-Wiley.

Despite many suggestions – even some from New Orleans government itself – that the district should be abandoned, the community is not about to budge.

“There’s no question,” Green said. No matter where you move there is a threat of danger. “So there’s no sense in it. Just trust in God and have faith in him. If they tell you to leave we do the best we can, but at the same time, we build better the effects won’t be the same.”