The day began hot and muggy. The storms hanging over southern Louisiana had since parted, leaving the sky a clear and cloudless blue and the rivers swollen and rushing. The water of Grand River ran the light brown of coffee and cream. The whining motor of the boat propelled it past the barges and towards the flooded groves of cypress, tupelo and willow that make up the Atchafalaya Basin.

Dean Wilson stood at the helm of the small craft. His co-pilot, an aging but eager German shepherd named Shanka, stood at his side, ears flat back in the wind.

The motor died as the boat pulled up to a series of pylons marking an oil pipeline canal. Wilson swung the wheel to the right into a nearly invisible gap between the trees and into a waterway he called “the tunnel.”

“Are you ready for the adventure?” he asked in a thick Spanish accent.

He gunned the boat as it wove through the narrow gaps between branches. The sounds of birdsong and the occasional fish rising from the water were the only sounds heard above the whining of the engine. The scenery grew greener and greener inside the bayou. 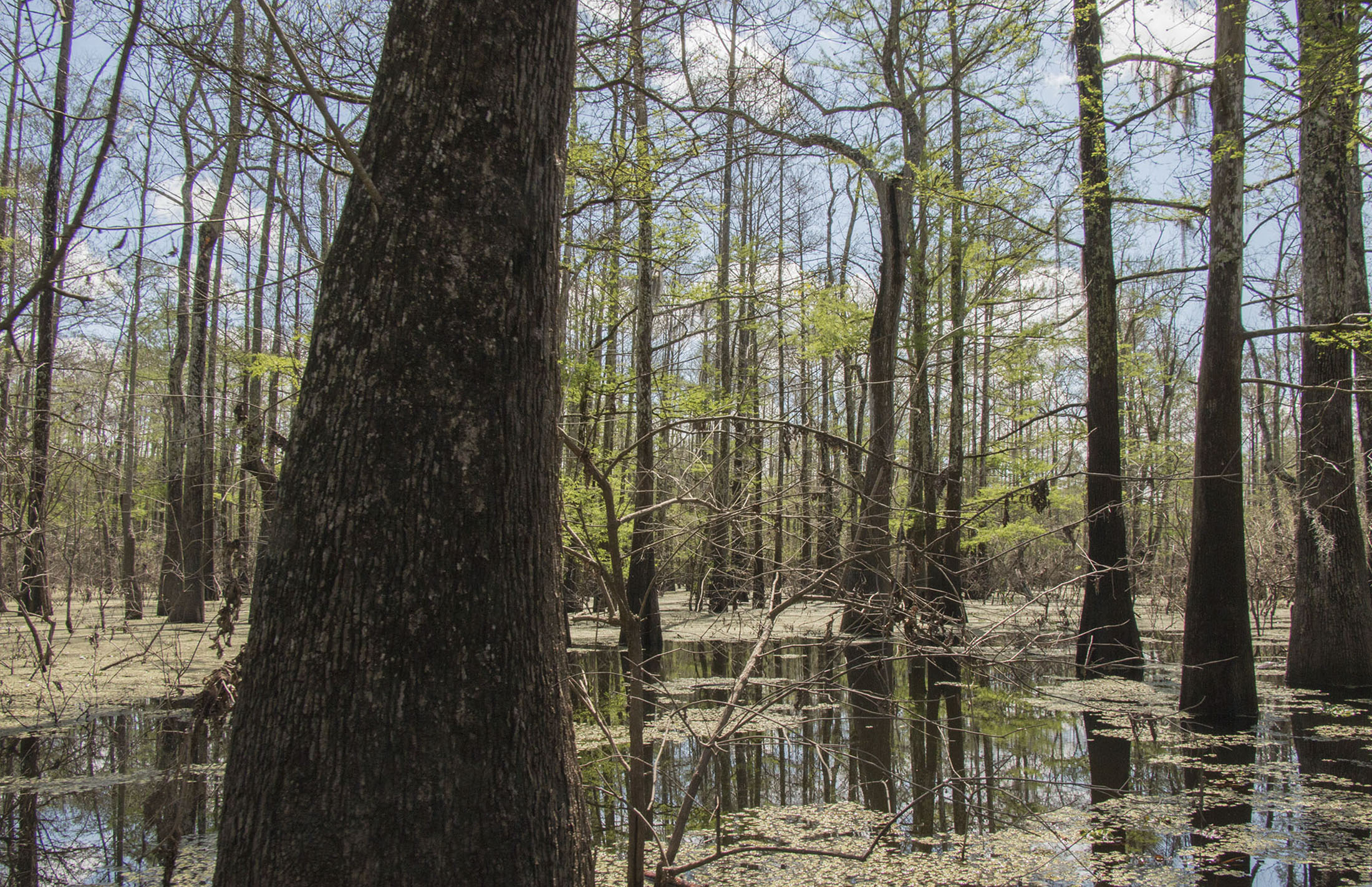 The swamps and wetland forests of the Atchafalaya Basin are filled with tupelo and cypress trees, which can grow for hundreds of years.

Then the claustrophobic tunnel opened into a water-bound clearing bordered by towering cypress. Wilson called them “hundred-year-old babies.” Even the smallest of these trees have grown for at least a century.

The Atchafalaya River Basin spans about 1.4 million acres, including the ecologically vital 885,000 acres of forested wetlands and 517,000 acres of marshland.

It is a tributary of the Mississippi River that carries about 229,000 feet per second on its way to the Gulf of Mexico, a flow that is greater than all but a few major streams in North America. Hundreds of species of fish and animals live in the bayous and hundreds of migratory birds and year-round residents call this basin home. One such occupant was a juvenile bald eagle, still too young for its characteristic white head, which kept watch as the boat entered its territory.

This vast natural resource is endangered, however. Every year, hundreds of acres are destroyed by logging and over sedimentation of the basin from water diverted into it from the Mississippi River. 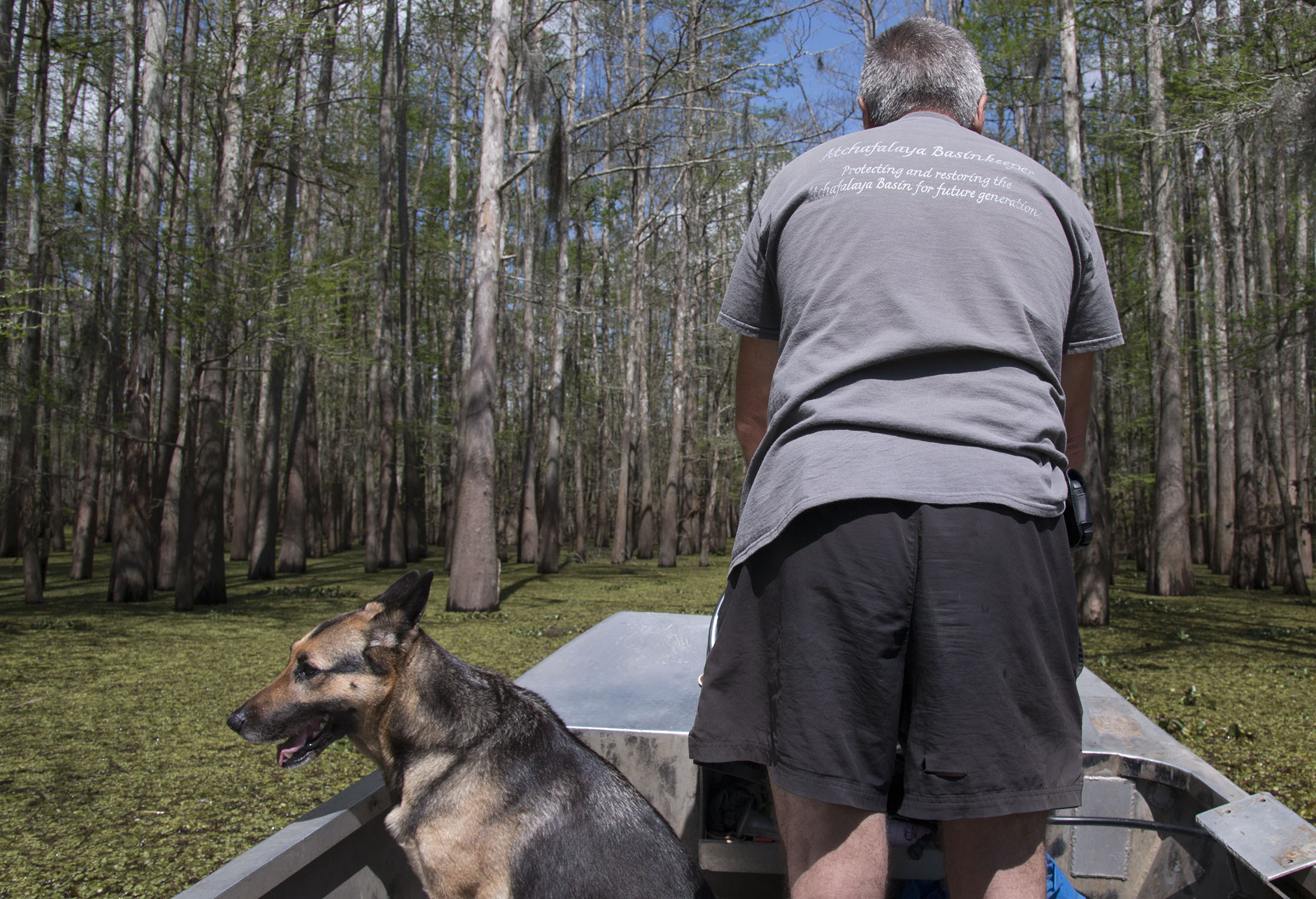 Dean Wilson was a commercial fisherman before companies began logging in the basin. Now he works to raise awareness and fight destruction of the swamp ecosystem through Atchafalaya Basinkeeper.

Wilson is the executive director of Atchafalaya Basinkeeper, which is dedicated to preserving the Atchafalaya through monitoring illegal development of the wetlands, enforcement of regulations and education of the public.

“I used to be a commercial fisherman,” Wilson said. “In the year 2000, they started logging our cypress trees to make mulch so I became an activist trying to protect the trees.”

Wilson said he formed Basinkeeper in 2004 with the intention of eliminating “greenwashing” of the basin’s plight.

Greenwashing is a public relations practice designed to get the public to believe there is no problem with an issue. In the Atchafalaya, Wilson said, environmental groups also engage in it, sometimes in a passive sense, where issues are ignored, and actively, when a group lies and says something is environmentally friendly when it isn’t.

The Basinkeeper organization is designed, according to Wilson, to be uncorruptable. If it discovers some kind of environmentally harmful activity, it must litigate based on its bylaws.

“When I started Basinkeeper, I learned why things are so bad in Louisiana,” Wilson said. “I started learning about greenwashing and I didn’t want to begin a group that will end up like the other ones.”

With this policy, Basinkeeper has led the fight against such harmful practices as commercial logging in the basin, and the over-sedimentation of the marshland, which Wilson said is the single biggest threat to the swamps.

Two hundred years ago, the canopies of the cypress trees grew so thick that no sunlight reached the water, even on bright days.

This seemingly inexhaustible wilderness met its end at the saws of loggers that harvested this forest for building materials as far back as the 1700s. Stumps four feet across that were cut 200 years ago are still present. 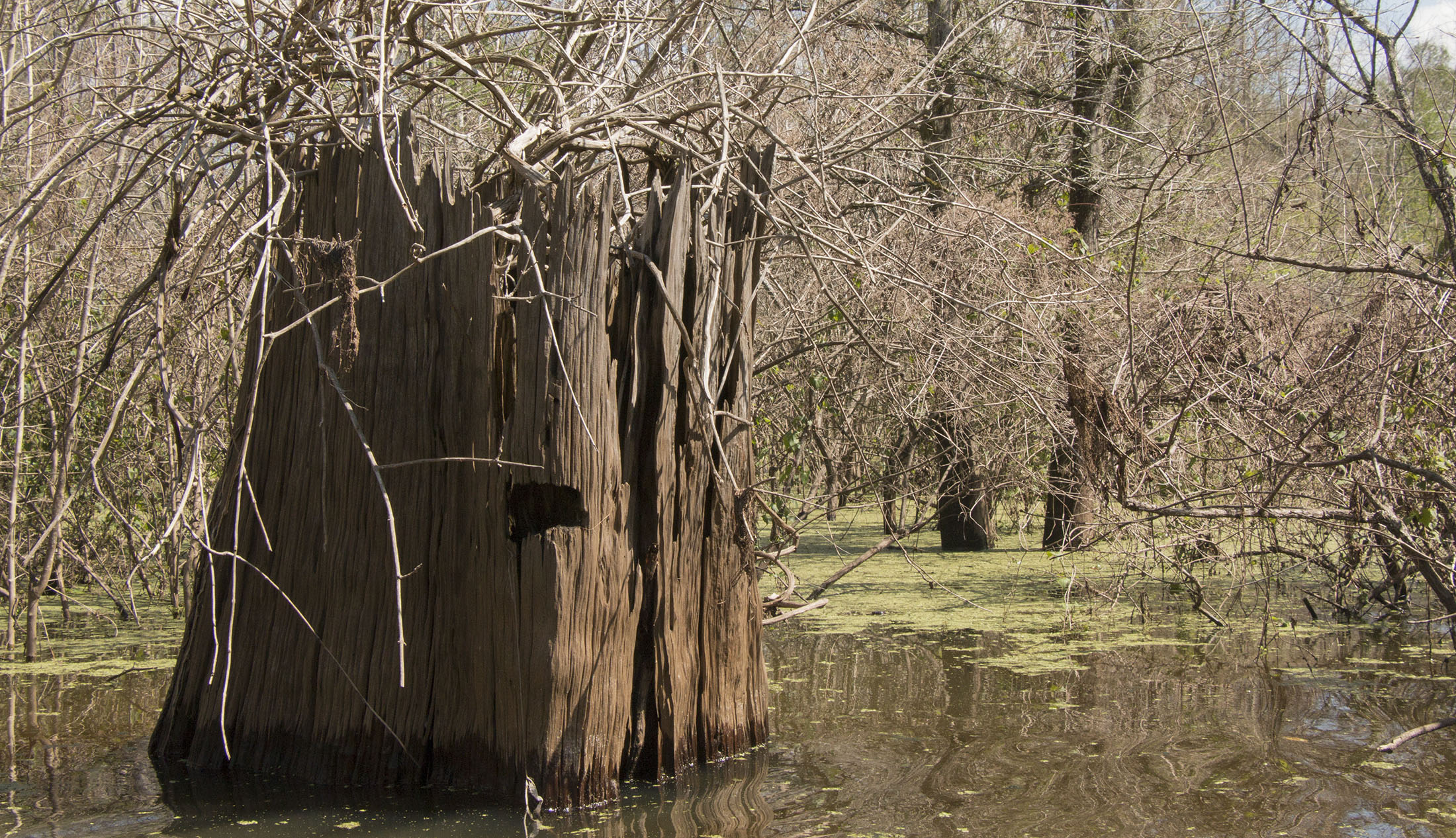 Stumps of cypress trees cut as far back as the 1800s still stand in the Atchafalaya. Almost every fully grown tree was cut from the basin, and it will take hundreds of years for them to grow back to their former prominence.

More recently the trees have been harvested for mulch and wood pellet stove fuel, Wilson said. Wood pellet stoves use compacted wood products as a high efficiency heat source. He said companies have been illegally cutting down cypress trees in the basin for mulch, which was sold at local stores as “environmentally harvested” from Florida, resulting in more than 20,000 acres of wetland forest lost a year between 2000 and 2007.

Wilson said Basinkeeper followed the trucks from the logging sites and took pictures along the way. The mulch was being sold at major retailers, which were confronted in 2006 and 2007.

Now, none of the retailers will source mulch from the area. He said the litigation was successful because the logging was illegal and the companies did not have permits to build roads in the basin.

Wilson said the fight against unsustainable logging is still ongoing. He said European manufacturers of wood pellets for special heating stoves have been cutting down trees in the basin in a way that is unsustainable. He said companies were harvesting the cypress trees in the basin for what is called a more environmentally friendly fuel alternative.

One company’s CEO and chief forester went into the Atchafalaya with Wilson to see what they were cutting down.

“They voluntarily agreed not to touch the forests, so we saved them a second time,” Wilson said.

As the trees are being cut down, the swamps they grow in are gradually filling in with sediment. Seven miles west of where the Red River becomes the Atchafalaya, the Old River Control structure, completed in 1963, redirects 30 percent of the combined flow of the Mississippi and Red Rivers into the swamp. This redirection ensures that Mississippi River remains in its current tract, protecting the cities along its banks. 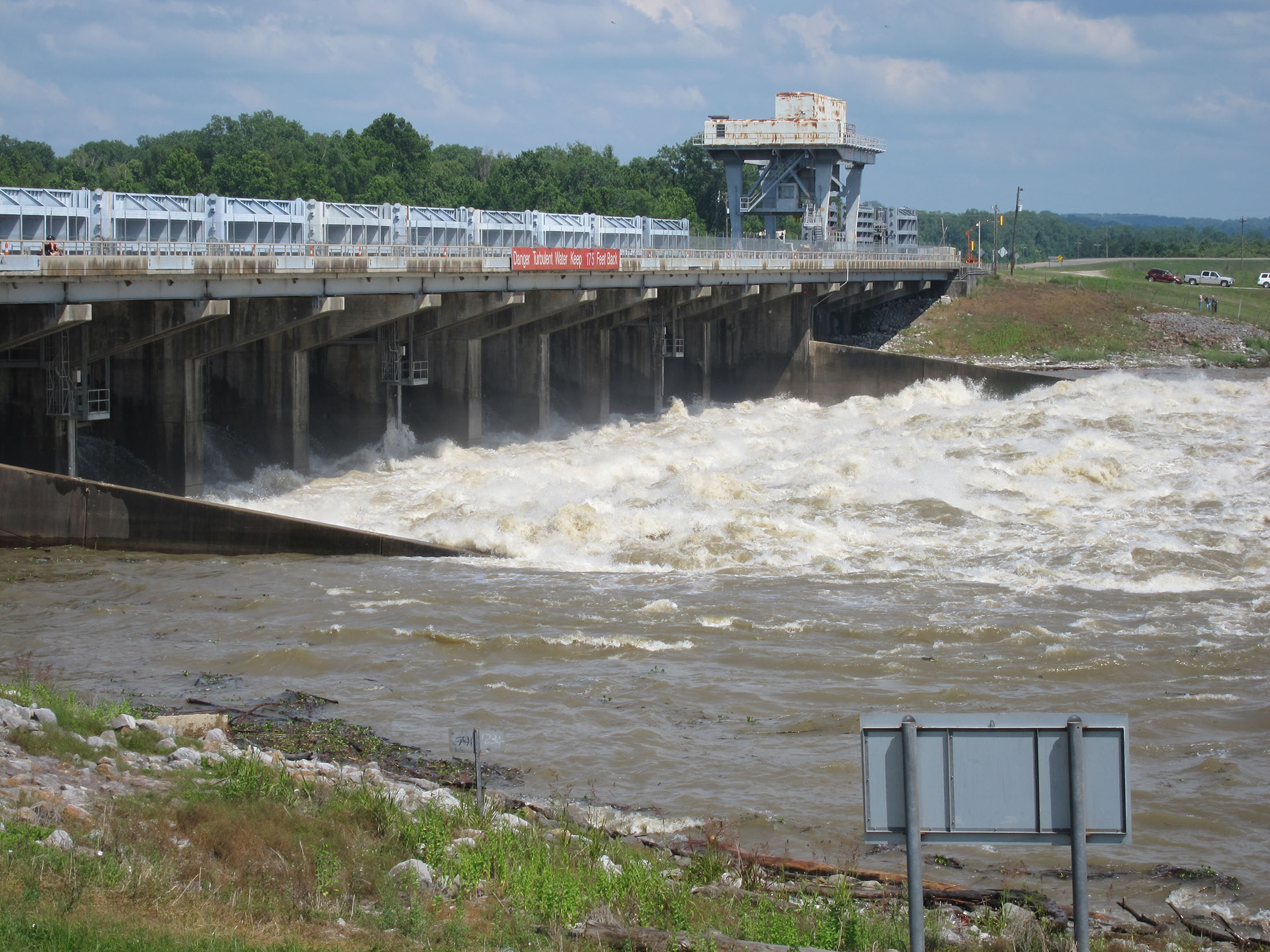 The Old River Control Structure diverts 30 percent of the combined flow of the Mississippi and Red Rivers into the Atchafalaya Basin, carrying tons of sediment with it. (Courtesy Tobin/Creative Commons)

This increased flow brings not just water, but tons of sediment much of which the basin cannot discharge. Further north of where Wilson is on this day, almost three quarters of the swamps have been filled by this incoming sediment.

According to Wilson, many companies or government interests in the wetlands want them to be filled in due to looser restrictions on upland development. When development happens on wetlands, there are many restrictions and environmental concerns, but dry, upland forests are not subjected to the same regulations. He said that the construction of the Old River Control and the levees on the Mississippi River by the U.S. Army Corps of Engineers, along with the lax enforcement of construction regulations in the basin have sped up the destruction of much of the Atchafalaya Basin.

“The Corps of Engineers, behind the scenes and quietly, have been diverting waterways in ways that maximize the sediment loads from the Mississippi River to the Atchafalaya and from the Atchafalaya to the swamps,” Wilson said.

Ricky Boyett, chief public affairs officer for the Corps, said that the building of sediment in the basin is a result of a settlement between the competing interests in the area. Without the diversion and control of the Mississippi River, it would gradually change its course naturally through the basin, destroying the economy and physical structure of cities like Baton Rouge and New Orleans. 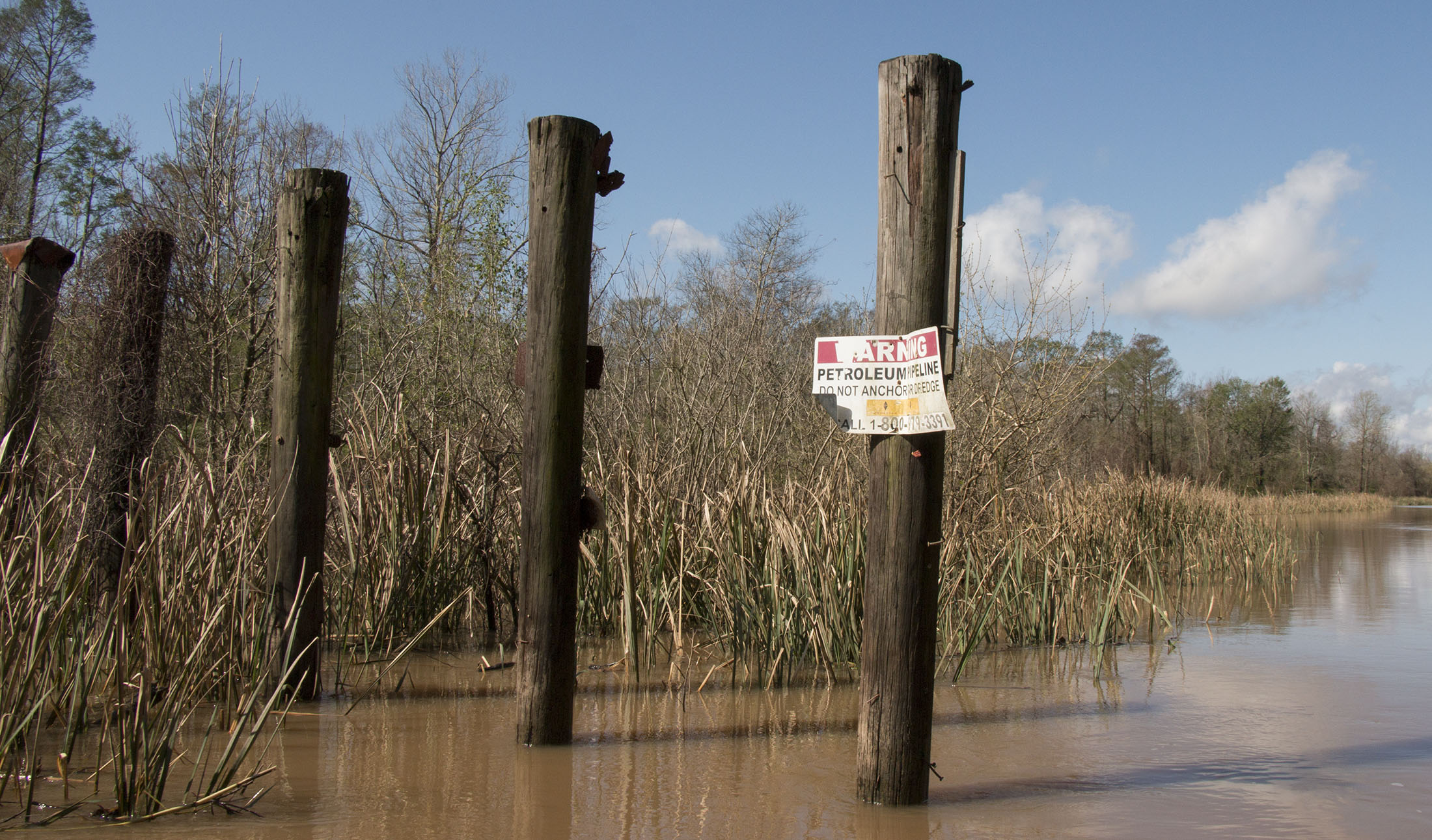 Canals have been created by oil companies in the basin for pipelines. Not only does this mean cutting vital trees, but it allows saltwater to intrude into the swamp, killing even more of the delicate plant species.

“If we didn’t have the Old River Control Structure, then what you would have in the area is the Mississippi River and you wouldn’t have a basin at all,” Boyett said. “You kind of have a trade-off to keep the river where it’s going. To do that, you have to keep the flow of where we found it or watch the river change course.”

The Corps also regulates development and logging in the Atchafalaya Basin. Regulatory jurisdiction was given to it by the Environmental Protection Agency. Companies seeking to develop in the area must seek a permit from the Corps.

Wilson said much of the damaging development done in the basin is from those operating without a permit. Basinkeeper and the Tulane Environmental Law Clinic have brought those who build canals and roads for logging in the basin without a permit to the attention of the Army Corps. He said there are many that are not punished for their illegal action, with many receiving after-the-fact permits for their work, making it impossible to litigate against them.

“It’s to the point that if somebody illegally destroyed wetlands in the basin, they don’t enforce,” Wilson said.

Atchafalaya Basinkeeper has been more successful in its efforts with Tulane University Environmental Law Clinic to block construction in the basin. Since their partnership started in 2004, they have stopped every permit a new canal.

Boyett said there are between 12,000 and 15,000 permits in process at any one time and almost all construction in the basin is legal. He said most violations are from people who did not know they needed a permit, and they quickly stopped construction to apply. 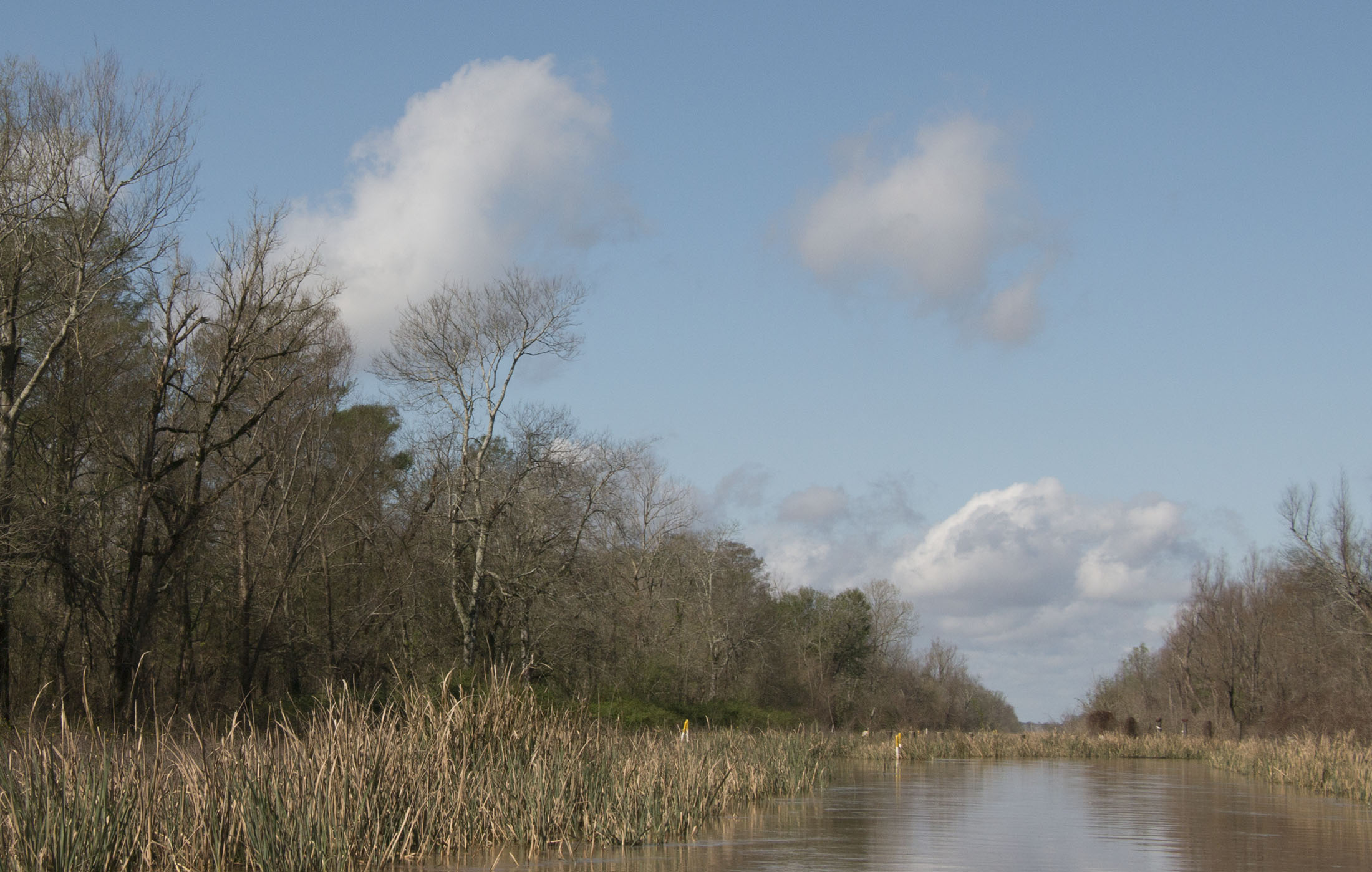 Excess sedimentation and hundreds of years of logging have left the Atchafalaya a shadow of its former self, but groups such as the Atchafalaya Basinkeeper are fighting to preserve it.

“We immediately say everything needs to stop while we evaluate what has occurred and what needs to occur next,” Boyett said. “At that point, we give them an option; you can either return it to how you found it or you can seek a permit.”

Boyett said punitive actions, like fines, are a last resort for enforcement. Most companies who do not seek a permit instead return the area to its original state and do mitigation in the area to make up for the impact.

Hours after entering the basin, Wilson steered the boat out towards Grand River. As the boat left, the basin seemed no less serene; the trees still swayed in the light breeze, the water still lapped at the side of the boat and unseen birds still called to each other from the branches above.

Yet hundreds of years of scars remained. The stumps of logged trees and the gaps in the canopy they left behind stood out like missing teeth. The previously invisible logging canals crisscrossed the basin like lines on a highway.

Despite the efforts of people like Wilson and the Atchafalaya Basinkeeper, the future of this river of trees is still uncertain.